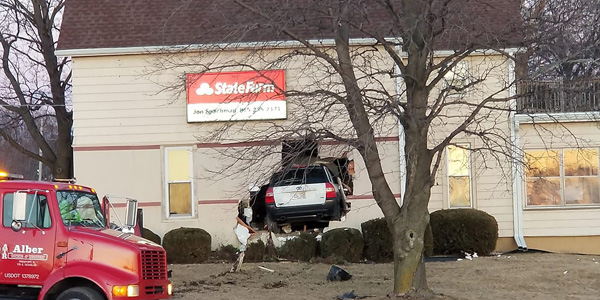 The first day of March was an eventful one for a State Farm agent in Freeport, Ill.

The first day of March was an eventful one for a State Farm agent in Freeport, Ill.

Around 5:30 p.m. on March 1, an SUV crashed into the office of local State Farm agent Jon Spachman, lodging itself inside the building, according to an article on JournalStandard.com.

Fortunately, no one from the agency was injured, and Spachman had left for the day – which was good, because he told the newspaper that the SUV landed at his desk.

The driver, who was cited for two traffic violations, had swerved to avoid hitting another vehicle and struck the median, which launched the SUV into the air, according to the article on JournalStandard.com.

Advertisement
In this article:insurance, state farm

Not a Drive-Thru Claim Center: SUV Crashes into State Farm Office in Illinois