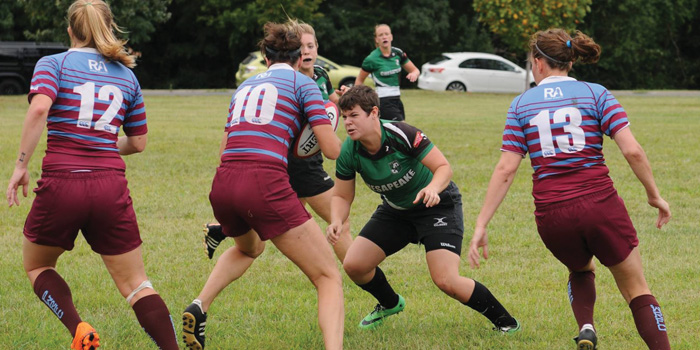 Body shop manager and rugby enthusiast Jessica King has forged a path for women in the auto body industry and made a believer out of customers and employees alike.

“I would have never in a million years thought that I would have been a body shop manager,” said Jessica. “But the second that I walked into this business, I really decided that that’s what I wanted to do.”

You think she’s just some 20-something girl? Hah. Think again. Jessica is out to prove she’s just as good, if not better, than the guys. And she’s doing it one kick at a time as a member of a rugby league based in Baltimore.

“I always enjoy seeing people’s reactions when I tell them I’m an active rugby player,” Jennifer said. “The responses are amusing: ‘Doesn’t that hurt?’ ‘That’s like football with no pads, right?’”

Jessica’s favorite aspect of the sport is the connection she shares with other players, whether it’s her teammates or the opposing team. The same goes for her role in the auto body industry. It’s her connection to customers and cultivating relationships with them that drew her to the industry in the first place.

Jessica was captivated with the customer relationship that’s formed during the repair process. She was intrigued at how every day was presented a different customer, a different vehicle, a different situation.

“No matter how many estimates you write, customers you interact with or vehicles you repair, they are all different,” she said. “Vehicles will always be changing, and the clientele is so diverse. Hardly ever do you have the same customers come in with the same damages. It’s like being able to paint on a new canvas with new colors every time someone different walks through the door.” 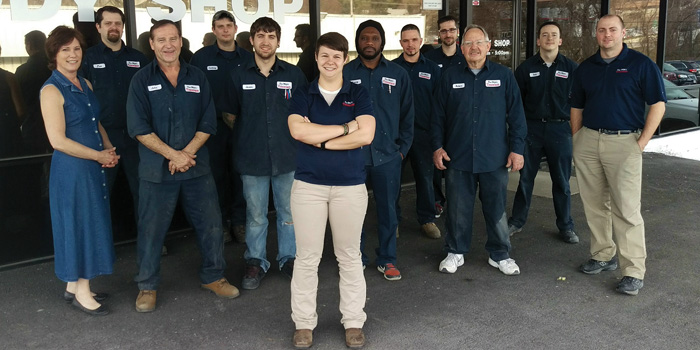 Jessica and her team at Don White’s Body Shop.

Jessica started as a secretary in a dealership body shop in Greenville, N.C. Once she actually got her feet wet, she began to truly enjoy working in the industry and started to gain the confidence of her mentors. Then, at the age of 21, she was promoted to assistant manager.

“I think I really defied their ideas of what my role would be in that particular shop,” she explained.

That’s when Jessica decided to take a leap of faith and set up an interview at a body shop in Bel Air, Md. Lo and behold she landed the position of assistant manager, but soon after, the shop closed its doors. And that’s when she found herself at Don White’s.

She continued to keep pushing herself, despite having to live in the shadows of men for the majority of her career.

“I think the hard work really began to shine through to the owner and fixed operations director, and just before my two-year anniversary, they named me body shop director.

“It definitely took a lot of devotion and hard work to get where I am. I think being a naturally competitive person really gave me that ambition to be the best I could be and to put forth every effort to try and make it to this point. And, of course, proving to my male counterparts that if they can do it, so can I!”

The biggest hurdle Jessica had to conquer being in the auto body industry was simply being aware of the perception people have of body shops.

“I had to feel confident enough to be able to project proficiency, not only to my customers but to the organization and my peers,” Jessica said. “It’s been rewarding to get this position and to push forward. So just the fact that I’ve worked from the bottom as a secretary answering phones, and then to be in this position now…I just really had something in my mind and I stuck with it.”

Jessica has, in recent years, been able to transcend people’s perception of her and her gender in regards to the body shop. She makes an effort to never bring it to the forefront of any decision-making.

She stays on the right side of issues and tries to make the best decision at every obstacle, leading by example. In doing so, she has fully gained the respect of her peers.

“This is an industry where you can learn something new every day; it’s about absorbing the knowledge that’s available and being able to apply that to everyday scenarios and finding the best solution to each problem and conveying that to your team.

“Your team will have confidence in you, and the respect comes hand in hand. To have the technicians I work with every day see me as their leader, not as the ‘woman running the show,’ it’s worthwhile. They hold me to the highest standard, as they would any other manager. That’s respect.”

Jessica worked hard to garner support and respect as a young female in a mostly older, male-dominated industry. People seem to have this image of women in general and how they don’t belong in this industry, Jessica explains. Just 10 to 15 years ago, women were scarce in shops.

But being able to put herself out there and show that she was capable of doing anything her male counterparts could really aided in Jessica’s climb up the ladder.

“Don’t get me wrong, it took a lot of hard work and standing behind somebody all the time to be able to get here,” she said. “I’ve had some really good mentors to help me get this position as well.”

While there most certainly is a shortage of females in the industry, there’s also a scarcity of young people in general coming into it as well. It’s a big problem shops all over the country are facing, one that needs to be taken head on.

Jessica has a few younger people in her shop currently and knows how privileged she is to be able to have them.

“Good, solid body men are hard to come by. I’m fortunate to have really good technicians to teach and to coach these young, aspiring technicians the tools of the trade.

“I think if the younger generation knew the money to be made in this industry and how knowledgeable you can become, it would completely change the game. I don’t think we put enough information out there for this generation to really grasp all the positives that can come out of this business.”

It can be difficult to be a female, or even a young person, in this industry. But Jessica has some simple advice for those willing to work hard and push forward.

“Don’t let someone else’s skepticism keep you from doing what you love. Prove them wrong,” she said. “Let those individuals be the fuel for your accomplishments. Make a name for yourself and you just might become someone else’s motivation.”

Advertisement
In this article:Shop Profile

One Kick at a Time