Focus on Body Shops of America….. 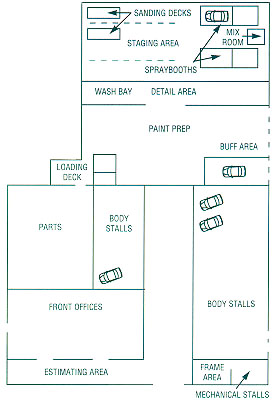 Nothing stands in the way of Chris Donnelly doing his job.

Not even the interview for this story.

While visiting with Donnelly, owner and operator of Body Shops
of America, located in Fort Worth, Texas, we were interrupted
by phone calls, employees who had questions and out-of-town guests
who were touring the shop. And when the phone rang more than two
times, Donnelly picked it up himself.

But don’t jump to the conclusion that he’s rude. To the contrary,
he’s apologetic almost to a fault when, truly, there’s no need
for an apology. Running a 41,000-square-foot collision repair
shop that’s only 14 months old is enough reason to be focused
on it and only it. And since its sales have quadrupled in the
last nine months, you can’t argue with Donnelly’s modus operandi.

When asked what he did to achieve so much growth in such a short
period, he downplays anything that he’s done personally, including
his 14-hour days. "I bought the body shop business of a dealership
on one side of me, while the dealership on the other side that
handled four car lines closed its body shop," he says. "Combine
that with the direct repair programs I already had in place and,
suddenly, I had credibility in the consumer’s eye."

Although Donnelly makes it sound like business came naturally,
it was up to him to convince both dealerships to make referrals
to his shop. That, of course, wasn’t an easy task since the dealerships
wanted solid assurance that Donnelly’s shop would treat their
customers right. "Most of our customers are referred to us
from our dealership accounts, but we don’t take them for granted,"
explains Donnelly. "We view a referral only as an opportunity
to sell the customer on our shop."

And while Donnelly is the "out front" person trying
to "sell" each customer on his shop, he’s shy when it
comes to taking the credit. "It’s nothing that I’ve done
individually," he says. "The success we’ve had is the
result of everybody pitching in … we’ve done it together. I
have the part that I do, but it’s no more important than what
the painters or anybody else does. A car can’t be completed without
everybody’s efforts. Everybody here has sacrificed to make this
work."

As modest as Donnelly is, there’s no doubt that he’s the driving
force of the business. Like the owner of a fine restaurant, he’s
concerned with only one thing: the customer’s satisfaction. "The
car that’s sitting in front of me is the only thing that matters,"
he says. "If we repair it to the best of our ability, I know
the customer will be happy. And if he’s happy, he’ll tell his
friends."

As important as word-of-mouth advertising is, Donnelly doesn’t
stop there. He also favors advertising that will "help people,"
which coincides with his personal philosophy of making people
happy. He’s more inclined to sponsor a Little League team (which
he does) than buy a radio ad because he can see tangible benefits.

Along the same lines, he’s sponsored a customer’s daughter in
a teen beauty pageant, bought advertising space in one of the
community’s school yearbooks and regularly taken breakfast to
the service advisors at the dealerships from which he receives
his referrals.

Perhaps the ultimate advertising weapon is the once-a-week cookouts
Donnelly has for his employees, two dealerships and any vendor
or insurance person who’s making a call. "There’s no substitute
for the cookout," says Donnelly. "It creates a lot of
good will for all parties, and we have fun doing it."

"The competition can’t do anything for me," he says.
"They can’t paint cars for me, do my paperwork or pay my
bills. Until they get on my payroll, I’m not going to worry about
them. They are simply a distraction from the day-to-day business
of running a shop. The customer is our focus – our only focus."

Only two years in public accounting convinced Donnelly that he
should change professions. Why? Because accounting didn’t fit
with his personal philosophy of making people happy. Fortunately,
one of his clients was a San Antonio body shop owner who was looking
for a controller.

"It was highly motivating for me when I joined the shop because
they hadn’t had a controller before, so I was able to get involved
with all areas of the business," says Donnelly. "I immediately
liked the job and the industry, so when I was presented with the
opportunity of opening my own shop, I jumped at it."

Suddenly a business owner, Donnelly had dozens of critical decisions
to make. "Every decision involves a major risk and can leave
you vulnerable," Donnelly says. Some of these critical decisions
included what products, equipment and suppliers to use.

As his paint supplier, Donnelly chose Sherwin-Williams. "Although
I think there are several out there that have great products,
it was Sherwin-Williams that would commit to my particular needs,"
he says. 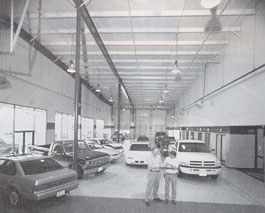 One particular need was to get all his employees on the same page.
Since Donnelly had brought in employees from various places, they
all had paint preferences and wanted to use the products with
which they were most familiar – but Donnelly decided he would
have to be arbitrary on this subject. "The Sherwin-Williams
team came in and showed my people how to work with their products
and followed up just about every day," Donnelly says. "Without
this kind of support, it would have made opening this shop a lot
more challenging."

Choosing the right computer system also was a critical decision,
so Donnelly recruited his wife Christina, who joined the company
several months ago, to help him with this purchase. "Ultimately,"
says Donnelly, "the [Rome shop management] system will save
us time and trouble because it will follow a car from start to
finish, and the repair ticket will be balanced to the original
insurance estimate. Along the way, the production manager will
be able to see exactly what needs to be done to each car."

Besides equipment, critical decisions also had to be made in the
personnel department. Donnelly’s employees are a mix of experienced
and inexperienced collision repair people. Two of his three service
advisors had no formal collision repair experience before they
started working for Donnelly, but he sent them to a local technical
school for estimating training and to ADP Shoplink training. His
production manager has 19 years experience as an adjuster for
a large insurance company and two years experience as a service
advisor. The painters are Sherwin-Williams certified, and the
body men are I-CAR welding certified.

To keep abreast of the industry, Donnelly took his entire management
team to NACE in Las Vegas in December. "Not only did they
learn a lot about the industry and its many products, the team
bonded out there," he says. "The trip was worth it for
that reason alone."

Donnelly says that Body Shops of America is well-positioned for
the future: "There’s no doubt that insurance companies are
focusing on larger facilities. It makes economic sense that the
greater number of vehicles a shop can work on for an insurance
company, the less staff an insurance company has to employ to
handle its claims. Our relationship with the insurance companies
is good for our customers, too, because it saves them money and
makes it easier for them to deal with us."

Bottom line: Donnelly says that consolidation in the industry
is good because it will help improve the image of the industry.
Furthermore, he says dealerships will need to make a commitment
in competing with the now larger body shops or elect to get out
of the collision repair business altogether. This, of course,
would leave a void.

"This is an exciting time for the independent body shop as
dealerships are being consolidated and, in some markets, alienating
their customer base, thereby displacing body shop customers,"
says Donnelly. "There’s a tremendous opportunity for the
independent to satisfy the displaced customers and to create lasting
relationships with them."

Even with consolidation, Donnelly is convinced that smaller shops
that carve out a market niche and service their customers "to
the hilt" will continue to do well. "It’s just like
when you find some very successful hardware stores a fraction
of the size of Builder’s Square or Home Depot."

As difficult as it is to open a new shop and compete in this highly
competitive market, Donnelly says anybody can do it if they’re
determined. "Look at me," he says, "I’m just an
average guy who, up to a few months ago, was working for someone
else."

Maybe so, but this average guy is likely to be opening another
shop in the near future if business continues to grow. And that
must have been what he expected all along. After all, there had
to be a good reason why he chose the plural name Body Shops of
America.