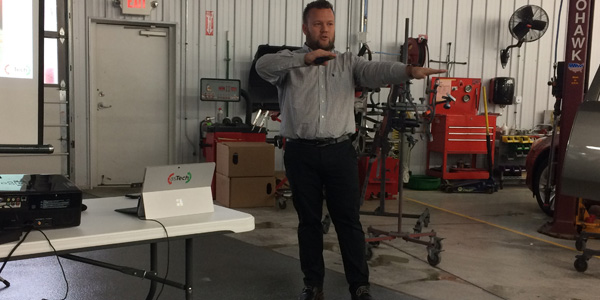 These are some of the high-tech safety and convenience features found on today’s vehicles. While advanced driver-assist systems might be making life easier for drivers, they’re making things much more complicated for collision repairers.

During a presentation at Centerline CARSTAR Collision in Strongsville, Ohio, Rodenroth talked about the changing landscape of collision repair, the ever-growing sophistication of vehicles and the importance of plugging into OEM repair procedures by performing pre- and post-repair diagnostic scans.

Take a battery disconnect. Once a straightforward operation requiring not much more than a 10-millimeter wrench, Rodenroth noted that on a 2011 Nissan Armada, the OEM repair procedures also call for resetting the electronic components.

“Now I have a chart of things I must do,” Rodenroth said. “That includes idle air relearn for the fuel injection, steering angle neutral-position relearn, automatic back door initialization and sunroof initialization. Then it talks about the radio presets.

“These are additional steps because I disconnected the battery, and we disconnect a lot of batteries in this business. It will only become more important on these newer vehicles.”

“We introduced 30 fault codes to this vehicle because of the nature of our business,” Rodenroth said. “We disassemble way down there, then we do body repair over here, then we paint it over there, and then we take it outside, and then we clean it over here. These cars don’t know that they’re in a body shop.”

Earlier in the week, Plano, Texas-based Repairify – the parent company of asTech – announced that it has acquired three firms that provide mobile automotive diagnostic services. Rodenroth noted that the deals are part of the company’s long-term goal to be “a complete solution to our collision ships.”