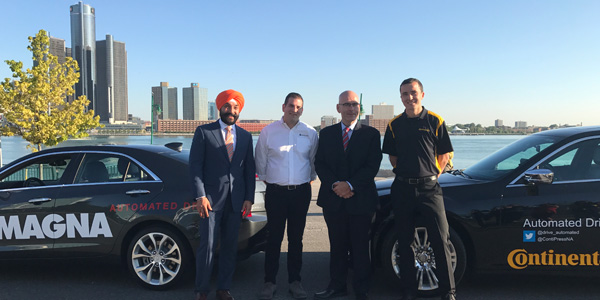 The test drive began in Detroit and continued from Windsor to Sarnia before crossing back over the border. The drive was scheduled to conclude in Traverse City, Mich., with the signing of a new agreement between Ontario and Michigan to continue collaboration in testing, developing and marketing automated- and connected-vehicle technology.

In 2016, Michigan Gov. Rick Snyder signed a package of bills enabling automated vehicles to operate on roads across the state. Also in 2016, Ontario became the first province to establish a regulatory framework to permit testing of automated vehicles, making it the only province to have an automated-vehicle pilot program in Canada.

Ontario has six participants in its pilot program: the University of Waterloo, the Erwin Hymer Group, Blackberry QNX, Continental, X-Matik and Magna, according to the Ontario Ministry of Transportation.

The ministry noted that approximately 100 Ontario companies and organizations are involved in the automated- and connected-vehicle industry.