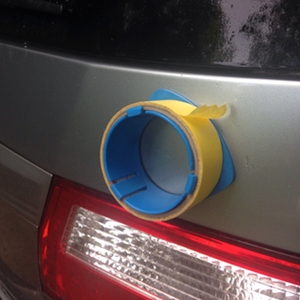 As a paint distributor, Tim Briggs frequently gets an up-close look at the collision repair process when he visits shops. On one particular visit, he noticed an employee struggling with some tape while working on a fender. He’d rip some off, then put the roll in his mouth while laying the piece down on the fender, then remove the roll from his mouth and tear off some more and repeat the process. When he grew tired of this, the guy set the tape roll down on top of the vehicle’s hood … only to have it fall off and roll into a puddle of water.

And that’s when Briggs decided that there had to be an easier way. He ventured to Lowe’s the very next morning, bought some PVC tubing and some magnets, and crafted his first edition of The Tape Thing – a magnetic placeholder for tape that can be adhered to and removed from cars so that it’s within reach at all times. It keeps tape securely in place without causing damage to the vehicles, resolving the issue of potentially losing or ruining a $10 roll of tape.

Since the birth of that first prototype, Briggs has worked with an industrial designer to draw up and produce about 1,500 Tape Things out of his own home. The newest version features three magnets and some anti-skids on the back.

"Right now, we’re building them ourselves because I really want to control the quality aspect of it and understand the process before I get it out there," he said.

The now-patented Tape Thing is the most recent invention to come out of Briggs’ side business, Collision Edge. The company produces products designed to make collision repairers’ lives much easier – and they’ve all stemmed from pure observation.

"I’ve always tried to solve problems of customers for years and years so I thought, ‘You know what, I’m gonna start patenting some of this stuff,’" he said. "Collision Edge kind of grew out of that need, trying to find solutions that weren’t there, and it just continues to grow."

Aside from The Tape Thing, Collision Edge also manufactures:

While it’s still early in its life, Collision Edge is diligently working to grow its customer base and spread the word about its products. Briggs has promoted The Tape Thing on social media outlets such as Facebook and Twitter, and through the company’s brand-new website: collisionedge.com. Since Briggs distributes PPG products, he also gets promotion from the paint manufacturer through its Green Belt classes. His next step will be to get in touch with some national warehouses to distribute the product, and he anticipates that The Tape Thing could even extend beyond the collision repair industry and into other markets.

"I think that any time you solve problems for customers, you win," said Briggs. "I spent a ton of money on it. I’m scared to death, but I really feel like every shop in the country is going to have one."