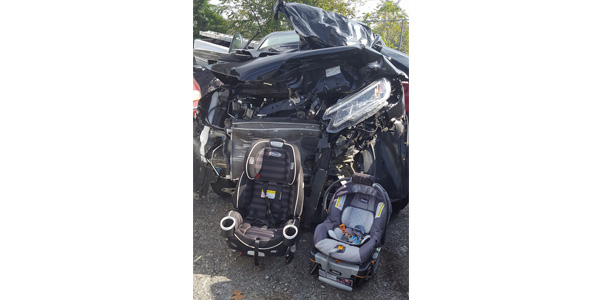 A Pennsylvania mother’s chilling crash photo is a reminder of why parents power through the crying, kicking and screaming to make sure their kids are buckled up and strapped in … every time.

Properly securing your kids in their cars seats can be a harrowing experience – especially when you’re under duress.

But a Pennsylvania mother’s chilling crash photo is a reminder of why parents power through the crying, kicking and screaming to make sure their kids are buckled up and strapped in … every time.

Jenna Casado Rabberman of Lancaster, Pa., says she and her kids stopped for milk on their way home from preschool. Just minutes from home, she says, a car slammed into their 2015 Honda CR-V.

While the CR-V didn’t survive the collision, Rabberman and her 6-week-old son and 3-year-old son did. In a Facebook post that has gone viral, she says her boys “escaped without a scratch.”

However, the paramedics told her the accident could have taken a very different turn if Rabberman wouldn’t have spent “the extra two minutes to be sure they were buckled correctly.”

“This is why you buckle your kids into their car seats correctly every single time,” Rabberman says in her Facebook post. “ Even when they scream because the straps are tight. Even when they complain about the chest clip or being rear-facing.”

“I never expected this post to be seen by so many people,” Rabberman says in a postscript. “I really only posted it for family and friends but hopefully it will save a life by making someone think twice about buckling their child in.”