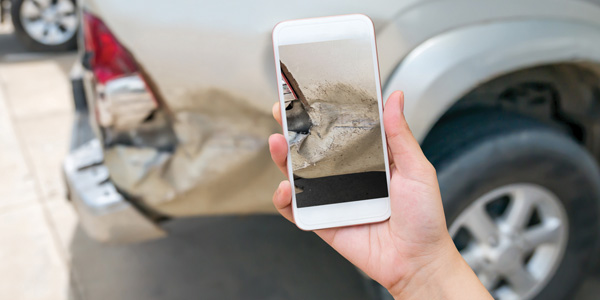 As a consumer, I can tell you that photo-based estimating is a joke. And the only ones laughing are the insurance companies.

It’s ironic that in nearly 30 years of driving, I’d never been in a collision – until I started writing for BodyShop Business.

The irony wasn’t lost on me when a pickup truck rear-ended my car a few months ago.

Although I was rattled, I wasn’t upset. I looked at the big picture: It’s a 10-year-old car, and nobody was hurt. I was able to drive away with what looked like minor rear-end damage. (Plus, it was my first accident. How lucky can I be?) And I looked at the bigger picture: God has blessed my wife and I with two beautiful, healthy children – and thankfully, they weren’t in the car when the accident occurred. How lucky can we be?

Then another thought popped into my head, which was supposed to give me an added measure of comfort: “This is why we have insurance.”

Before I talk about my claims experience, let me set the stage: If you haven’t figured it out already, my background isn’t in collision repair. I’m a writer by trade. Speaking strictly as a consumer, I like my local insurance agent, and I’ve had mostly positive experiences with my insurance provider. (I won’t name names, but it’s one of the big ones.)

However, after writing for BodyShop Business for a year, I’ve learned a lot about the dynamic between insurance carriers and collision repairers, and I’ve learned about some of the things that cause friction between the two parties. Clearly, photo-based estimating is one of those sources of friction.

Now I understand why.

I’m not sure what possessed me to try my insurer’s photo-based estimating app. Maybe I wasn’t thinking clearly, still shaken from the collision. Maybe, in the back of my mind, I thought it would make an interesting story (although I don’t remember thinking that at the time). Ultimately, though, I think I was just … curious.

After calling my insurance company to start the claim process, I downloaded the insurer’s app, which includes the photo-estimating feature. The claim handler didn’t push it on me, but he mentioned it was an option. He also told me that while it’s my legal right as a consumer to choose my own body shop, I might consider taking my car to one of the insurer’s network shops, where the repair work comes with a lifetime guarantee. (I told him I’d think about it.)

Based on everything I’d heard and written about photo-based estimating, I had serious doubts about the app. But I went outside to take some pictures anyway. At the very least, I figured it would be a good idea to have some documentation of the damage.

It didn’t take long for me to realize that photo-based estimating is a sham. 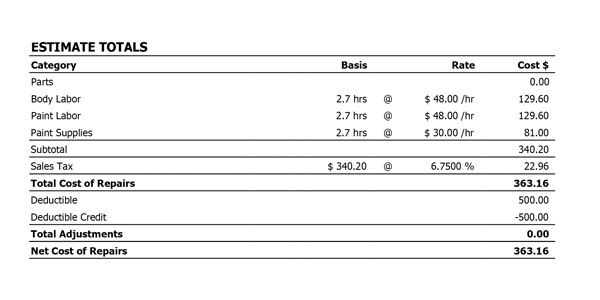 For starters, I could tell that the muffler assembly had been jostled loose from the collision. It wasn’t dragging on the pavement, and it wasn’t obvious to the naked eye. But when I reached under the vehicle, I could feel that it was a bit loose. Unfortunately, that was beyond the scope of what I could capture in a cellphone photo (and, as I soon found out, so was a lot of other damage).

Also, the trunk wouldn’t latch shut completely. However, it was imperceptible in the photos I was taking. If the app was able to accept a video, I could’ve demonstrated the damage by repeatedly opening and closing the trunk without using a key – but video isn’t an option.

So, I followed the prompts, took some pictures of the car from various angles, and uploaded them through the app – knowing the photos would fail to capture at least two aspects of the damage.

It was late afternoon on a Saturday, so I figured I’d have to wait until Monday to take the car to a body shop. But lo and behold when I opened my email on Sunday, there was an estimate from my insurance company.

Later that day, my insurer deposited $363.16 into my checking account. (I thought to myself, “Wow, that was way too fast.”)

Based on the pictures I took with my cellphone, an insurance adjuster had written an estimate that called for R&I of the rear bumper cover; repair of the bumper-cover base; and a partial refinish. Keep in mind it was Sunday, and I hadn’t scheduled an appointment with a body shop yet.

I’ll be the first to admit that I’m totally unqualified to assess collision damage. You – our readers – are the experts. But even as a layperson, I found it hard to believe that those pictures could’ve been the basis for a thorough, accurate estimate.

It turns out I was right.

First thing Monday morning, I brought the car to a body shop. Later that day, I got the shop’s estimate. Not surprisingly, it was much longer and more detailed than my insurance carrier’s photo-based estimate. In addition to replacing the rear bumper assembly, the estimate called for repairing or replacing a number of other parts related to the exhaust system, quarter panel, trunk lid and rear body and floor.

Keep in mind this was a network shop. Some of you might excoriate me for choosing a DRP shop, but I chose the facility because it was close to my workplace, had onsite car rental and had an excellent reputation.

When I told one of the shop’s estimators that I’d tried my insurer’s photo-based app, he rolled his eyes. He said – as diplomatically as he could – that he wasn’t a fan of photo estimating, and that they’d have to file a supplement. He also was well-aware that my insurance company had downsized hundreds of its adjusters – some of whom he’d known for years – and replaced them with the app. When I asked him what he thought about it, I could tell he was biting his tongue. Hard. 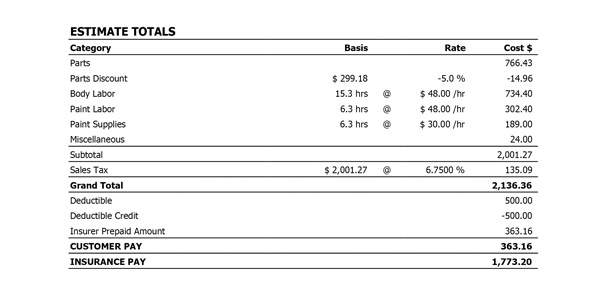 Overall, the repair process went smoothly. The shop kept me informed every step of the way, through calls, emails and texts. When I got my car back, it looked great. In the insurer’s customer-satisfaction survey, I gave the shop high marks, although not all 10’s – which prompted a call from the shop afterward to ask why. I guess it’s true that insurers come down hard on their network shops if they don’t get a perfect score.

When insurance companies talk about photo-based estimating, they say they’re just giving consumers what they want. And there’s some truth to that: As a consumer, I’m all for making the claims process better, simpler and faster; if technology can help with that, great. But I also want my vehicle repaired properly. And I don’t see how photo-based estimating accomplishes any of those things. It just tempts unwitting consumers to pocket their quick insurance payout – while the insurance company pockets the difference between the photo estimate and the true cost of a proper repair.

As I mentioned in the customer-satisfaction survey, it’s impossible to thoroughly assess collision damage – and the hidden effects of the collision forces – based on a few cellphone photos. There’s no substitute for the judgment of a trained, experienced collision repair professional. That’s something I’ve learned from working for this magazine.

Advertisement
In this article:photo estimating

Photo-Based Body Shop Estimates are a Joke: A Consumer’s Perspective

News: Pro Spot Offering Rebates Up to $3,000 on Many Products