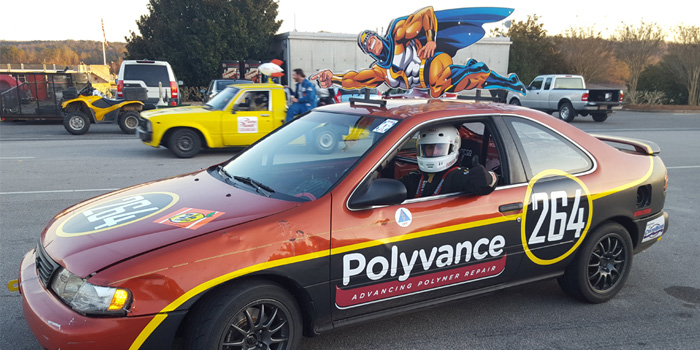 Polyvance, formerly Urethane Supply Company, announced it has completed the February 2016 24 Hours of LeMons race at Barber Motorsports Park in Birmingham, Ala.

“This was a fun team-building exercise for our company,” said Kurt Lammon, Polyvance’s president. “The 24 Hours of LeMons is all about making real racing affordable by limiting the price of the car to $500, excluding safety equipment.”

The Polyvance race car, bought from company employee Fortunato Ruiz, was a 1997 Nissan 200SX that had been damaged by a tree that fell on it in the tornados that struck Rainsville, Ala., on April 23rd, 2011.

“The car was a real trooper,” said Keith Lammon, vice president of Polyvance. “It had nearly 200,000 miles on it, and the compression was so low you could turn the engine over by hand with the spark plugs in. We had to weld the front bumper with our nitrogen plastic welder and fabricate a rear window out of acrylic since the tree busted it out.”

The Polyvance race team finished in 52nd place out of 93 cars, and would have placed in the low 40s except for a CV joint that went bad on Sunday morning.

“Luckily, the local parts store had an axle on the shelf, so we dove in there and fixed it and were back on the track in an hour and a half,” said manufacturing employee Mason Martin.

Added Kurt Lammon, “It was a setback in terms of our finishing place, but it added to the team-building experience for sure.”

“Our most important modification was the brakes,” said Scott Bixler, Polyvance’s R&D and tech support manager. “We swapped the stock brakes, which looked like they should have been on a golf cart, for some big Wilwood brakes with four piston calipers. They lasted the whole weekend with no fade.”

Polyvance’s race car survived the weekend unscathed, so the team is planning to contest the 24 Hours of LeMons race at Carolina Motorsports Park in September as well.

“This was a super fun event, and I’d encourage our industry peers – manufacturers, body shops or distributors – to get out there and race with us,” said Kurt Lammon. “We haven’t got the money to sponsor NASCAR teams like some of our esteemed peers, but I guarantee we had more fun than they did writing their checks!”