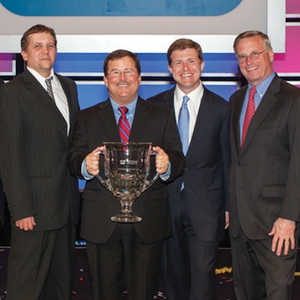 “It is always a pleasure to recognize the Platinum Distributor of the Year, and this year is no exception,” said Wenzinger. “Gipe Automotive has been an outstanding, customer service-oriented PPG distributor for years and deserves to be honored for its growth and success and the contribution it has made to supporting the PPG brand, our products and its customers. We are proud to recognize the Gipe team tonight.”

Added Gipe, “To be named Platinum Distributor of the Year is quite a surprise and very humbling. I’m accepting the award on behalf of our entire company. I’m happy for all the people at Gipe Automotive. They’re top quality, great to work with and the reason we’ve received this honor. We all focus on the success of our customers; that’s the key to our success. I thank PPG for recognizing Gipe Automotive.”

The SEMA Show includes, for the first time, a 6,000-sq.-ft. area dedicated to helping businesses understand how to customize and/or repair vehicles that have advanced driver-assistance systems (ADAS).