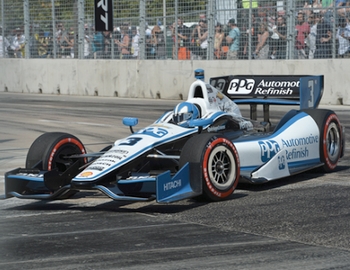 PPG Industries’ automotive refinish business has announced it will continue its longstanding support of Team Penske in the 2014 Verizon IndyCar Series. The season began March 30 and extends through Aug. 30 with 18 races in 15 locations across North America. PPG will be featured on Team Penske’s IndyCar entries driven by Helio Castroneves and Juan Pablo Montoya in upcoming races:

Helio Castroneves is coming off one of the most productive seasons of his career. He  finished second in the 2013 IndyCar title chase, led all drivers with 16 top-10 finishes and was the only driver running at the finish of all 19 races.

Juan Pablo Montoya makes his return to the Verizon IndyCar Series in 2014. The former CART Series champion and 2000 Indy 500 victor made winning transitions to Formula One and NASCAR and returns to his IndyCar roots with Team Penske this season.

PPG has enjoyed a longstanding business relationship with Team Penske and its parent, Penske Corporation, since PPG’s sponsorship of the PPG Cup from 1979 to 1999.