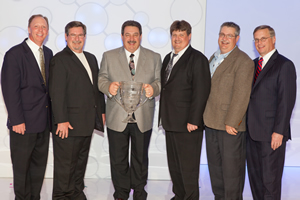 Bumgarner attended the conference with his brothers Glenn, Curtis, and Keith — all vice presidents of Ohio Auto Kolor — and his parents Charles and Ann Bumgarner, founders of the company. Other key business members were also on hand.

“We were all surprised and excited to find out we were Platinum Distributor of the Year,” said Bumgarner upon accepting the award. “We’re celebrating our 50th anniversary this year so we’ve been focusing on that. This award is something we will take great pride in, and I’m glad we — especially my mom and dad — were all here to accept it. And, of course, this honor belongs to everyone at our company. Thank you, PPG.”

Ohio Auto Kolor opened in 1962 in Dayton, Ohio, as a branch outlet of another local distributor. Charles Bumgarner managed the store with the help of two employees, one of whom — Paul Snyder — is still working at the company’s Springfield, Ohio, location. Charles bought the business in 1975, purchased several other stores in the area over the next few years, and successfully expanded the enterprise. The company became a single-line PPG distributor in 1962 and has consistently participated in key Platinum initiatives. In addition, Gary Bumgarner was active in the development of the Platinum Distributor program. Today, Ohio Auto Kolor has eight locations and 65 employees across central Ohio.

“Gary, his family, and everyone at Ohio Auto Kolor should be proud,” said Wenzinger. “They’ve been a PPG Platinum Distributor right from the start of the program. They take part in our training and support programs and pass their exceptional knowledge of PPG products on to their customers who respect them and trust them. Ohio Auto Kolor’s growth and success is a solid basis for being named 2011 Platinum Distributor of the Year.”

The PPG Platinum Distributor program began in 1995 as a loyalty and support initiative for PPG single-line distributors with the ultimate goal of providing exceptional service and benefits for PPG Refinish customers.