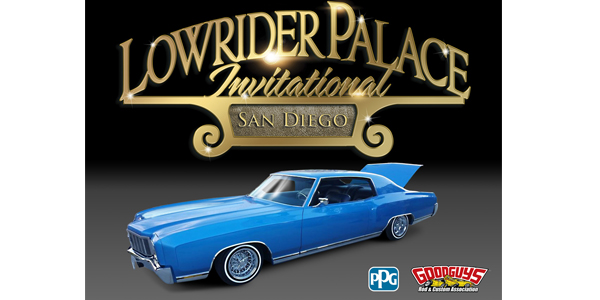 PPG and the Goodguys Rod and Custom Association have teamed up to create the PPG Lowrider Palace, a special indoor display featuring some of the most dazzling lowriders California has to offer.

There’s a special addition to this year’s upcoming Goodguys Meguiar’s Del Mar Nationals: PPG and the Goodguys Rod and Custom Association have teamed up to create the PPG Lowrider Palace, a special indoor display featuring some of the most dazzling lowriders California has to offer.
The brainchild of Ray Garcia, PPG territory manager, the PPG Lowrider Palace is a first for the Goodguys Del Mar event — the 18th edition of the annual show — set for April 6-8 at the Del Mar Fairgrounds, just north of San Diego. Garcia is a member of Switch San Diego, a lowrider car club, and is passionate about the entire lowrider community. He’s also the owner of a 1971 Monte Carlo he has turned into a showpiece.
“I thought lowriders deserved to be recognized and have their own category at Del Mar. Goodguys agreed, and together we created the PPG Lowrider Palace,” said Garcia. “Lowriders are an important part of the California car culture. The guys take great pride in their cars and put a lot of time and money into them to make them unique. As a PPG rep, I especially love the cars’ awesome colors and finishes — a lot of VIBRANCE COLLECTION effects — they’re unbelievable.”
Garcia spread the word about the event throughout the area’s lowrider network. Sixteen car clubs responded and are sending cars to the show. The PPG Lowrider Palace will exhibit 112 prequalified lowriders. These cars are elite enough that each entry will command an Award of Excellence. The cars will also compete for other significant awards.
“We’re very excited about the PPG Lowrider Palace,” said Ed Capen, Goodguys Rod & Custom Association, vice president, sales and sponsorship. “The lowrider phenomenon is big; it’s moving across the country. Lowrider owners are very serious about their cars. The build quality is excellent, the details they attend to are amazing, and they look fantastic. Lowriders are in the same league as the customs and street rods you see at our shows.”
Capen noted that Goodguys has displayed lowriders at shows in Pleasanton, Calif., for several years and is exploring similar exhibits for other locations. However, the PPG Lowrider Palace is a first for Del Mar and the largest Goodguys lowrider display to date.
“The PPG Lowrider Palace will be a first-class display,” Capen said. “We’re very pleased to partner with PPG to make it happen at Del Mar. We want everybody who loves lowriders to come out and see these cars.”
To learn more about PPG and its automotive refinish products, call (800) 647-6050 or visit www.ppgrefinish.com.
Click Here to Read More
Advertisement
Advertisement
In this article:Goodguys, ppg