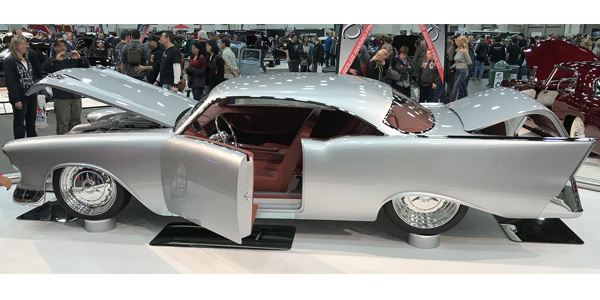 Imagine started life as an ordinary Chevy hardtop, but co-owner and custom builder John Martin and the talented team at Johnny’s Auto Trim & Rod Shop in Alamosa, Colo., gave it a new identity.

The annual event, a gathering of eye-popping custom-built cars and trucks, drew a competitive field of entrants vying for the coveted honor. It was the sixth time in 11 years that an entry painted with automotive products from PPG took the prize.

Established in 1963, the Ridler Award, named after the man who made the Detroit Autorama the nation’s premier custom car show, is regarded as the ultimate accolade in custom design brilliance. It is presented to the most outstanding custom car or truck making its first public appearance at the show.

Along with the Ridler Award trophy, the owner of the winning car receives a cash prize and a special embroidered jacket to commemorate the win. This year, Greg Hrehovcsik and John Martin, Imagine’s owners, shared the honors.

Imagine started life as an ordinary Chevy hardtop, but co-owner and custom builder John Martin and the talented team at Johnny’s Auto Trim & Rod Shop in Alamosa, Colo., gave it a new identity.

Martin’s crew handled the build that features heavy body modifications, a complete custom chassis and full leather interior. Tom Stark, owner of Precision Design Fabrications of Denver, helped out with the project. Wayne Saunders at Alternative Automotive Design in Colorado Springs and Johnny’s did hundreds of hours of bodywork and line sculpting.

Once it was built, Saunders – originally from England and known as “The English Painter” – finished the Chevy with “Imagine Silver,” a custom color Martin created. Saunders applied a variety of PPG products including Deltron NCP271 Corrosion Resistant Primer, Vibrance Collection VP2100 Polyester Primer, Deltron DBC Basecoat and DCU2021 Concept Urethane Clear along with DSC5250 Ditzler Satin Clear to give the car its lustrous finish.

To win a Ridler Award, a car must impress the judges sufficiently to qualify for the final round of competition, known as the Great Eight. Martin made it to the finals in 2011 with a crowd-pleasing Corvette. This time he made it all the way to the top.

Just getting into the Great Eight is a momentous triumph, and PPG-painted vehicles were well-represented.

“Tux,” a 1969 Camaro owned by Stuart Adams and built by the team at Detroit Speed Inc. of Mooresville, N.C., made the cut. The Great Eight finalist was given a lustrous black finish – hence the name Tux, as in tuxedo – by painters Michael Neighbors and Austin Moore. They used several PPG Deltron products including Concept DCC9300 Acrylic Urethane Black Single Stage and DCU2021 Urethane Clear on the body with DBC9700 Basecoat Black and Global Refinish System D8115 Matte Clearcoat on the car’s tail. 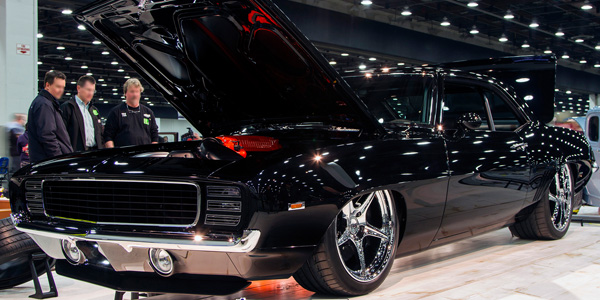 “Tux,” a 1969 Camaro owned by Stuart Adams and built by the team at Detroit Speed Inc. of Mooresville, N.C., made the cut.

A 1934 Ford pickup owned by Danielle Lutz also claimed a spot in the Great Eight. The truck was built in just 11 months by the well-established customizer Jason Graham and his capable crew at Graham’s Hot Rods in Portland, Tenn. Graham created an original color he calls “Washington Blue” for the show-stopping pickup. He painted the truck himself using PPG’s Deltron DP90LF Non Sanding Epoxy Primer and Concept DCC Acrylic Urethane Single Stage to get the exact hue and shine that would set the truck apart from the pack. 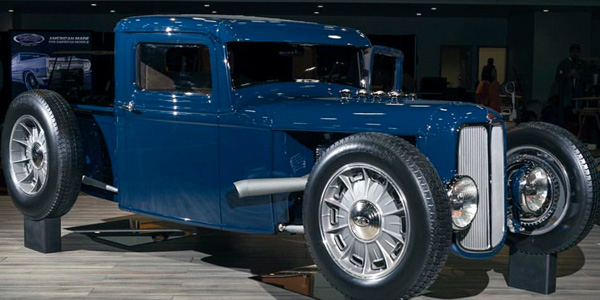 A 1934 Ford pickup owned by Danielle Lutz also claimed a spot in the Great Eight.

For more information about PPG and its broad range of automotive refinish products and brands, call (800) 647-6050 or visit www.ppgrefinish.com.

Advertisement
In this article:Detroit Autorama, ppg 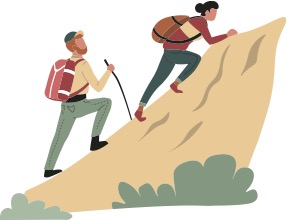