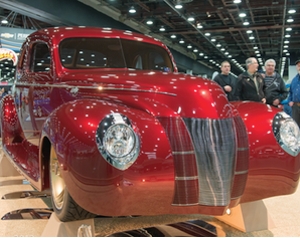 "Checkered Past,” a 1940 Ford coupe featuring a red PPG paint finish by Charley Hutton, has won the 2013 Ridler Award, one of the custom car world’s most coveted honors. The announcement was made at the 61st annual Detroit Autorama held at Cobo Hall in downtown Detroit.

The Ridler Award is presented to the most outstanding custom car or truck making its debut appearance at the Detroit Autorama, held annually in March. This is the third time in six years that a PPG-finished entry has won the award.

Checkered Past is owned by Ron and Deb Cizek of Bennington, Neb., and was built by Andy Leach and his crew at the newly-opened Cal Automotive Creations in Omaha, Neb. It was the first car the shop ever created.

Hutton, regarded as one of the most accomplished and talented painters in the custom car world, did the paint work at his shop, Charley Hutton’s Color Studio, in Nampa, Idaho, where he uses PPG Automotive Refinish products exclusively. Hutton gained a national reputation with appearances on the Discovery Channel’s American Hot Rod, TLC’s Overhaulin’ and on Hot Rod TV. This is his third Ridler Award. Previous wins came in 2005 and 2007.

“Being part of the team that won the Ridler was truly exciting,” said Hutton. “I love taking a car owner’s dream and turning it into a reality. It’s my passion. Seeing the look of surprise and excitement on Ron and Deb’s faces means a lot to me. I’m happy we could win this for them.”

The car’s lustrous custom color, dubbed Checkered Red, was personally created and mixed by Hutton, as were the gold – named Madysen Gold – body accents and the Tonic Brown used on the chassis. To achieve the exact colors and look he wanted, Hutton used PPG waterborne Envirobase High Performance (EHP) products. He also used D8152 Performance + Glamour Clearcoat for the body and D8113 Matte Clearcoat for the wheels to give the Ford its lustrous finish.

“The unique thing about using EHP is that the colors are so clean and crisp,” said Hutton. “What would normally be a three-stage process with solvent coatings only took two stages with Envirobase High Performance. The look of PPG’s Envirobase High Performance waterborne color makes it seem as if the color is just oozing off the car with a wet and rich look like no other. It is amazing what this technology can do, and with a difficult red color, no less.”

Hutton’s choice of the gleaming red paint captures the eye and brings out the best in the radically styled car’s body work that features recontoured front and rear fenders and wheel openings, a shortened hood running into the redesigned classic ’40s grill and hand-shaped running boards. The custom-built wheels and tailored two-tone interior enhance the overall look, and a flathead V8 with electronic fuel injection and supercharger and a six-speed transmission present a powerful machine.

The Ridler Award, officially known as the Don Ridler Memorial Award, was established in 1964 and named after the man who made the Detroit Autorama the nation’s premier custom car show. To qualify for the award, cars must debut at the Detroit Autorama and be selected to compete. From that field, eight cars – the “Great Eight” – are chosen as finalists. The winner is selected from this elite group. The owner of the winning car receives a cash award along with a special embroidered jacket and the Ridler Award trophy.