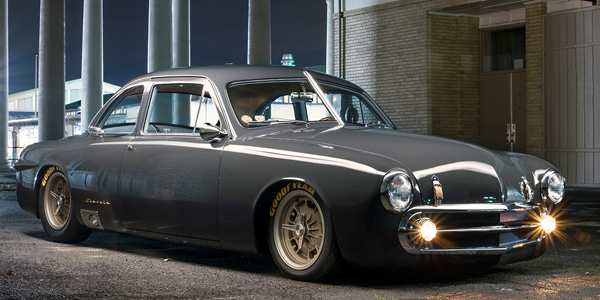 A customized 1951 Ford wearing a gleaming PPG finish stole the show and drove off with the coveted Winfield Award for automotive excellence at the recent 18th annual PPG Syracuse Nationals at the New York State Fairgrounds.

A customized 1951 Ford wearing a gleaming PPG finish stole the show and drove off with the coveted Winfield Award for automotive excellence at the recent 18th annual PPG Syracuse Nationals at the New York State Fairgrounds.

Owned by Bruce Leven of Auburn, Wash., built by Craig Wick and the team at Wicked Fabrication and painted by John Byers of Byers Custom – both also from Auburn – the dazzling Ford drew the approval of the crowd when the award was announced.

The Winfield Award was the Ford’s second prestigious honor in as many weeks. On July 8, the car’s outstanding paint job made it a PPG Dream Pick at the 20th annual Goodguys PPG Nationals in Columbus, Ohio.

The annual Winfield Award was established in 2010 by Gene Winfield – a celebrated master car designer and builder for more than 50 years – and is regarded as an exceptional honor in the custom car world.

Winfield chooses the winner based on which vehicle he believes best-represents the world of auto customization. Entrants for the Winfield Award are required to provide a list of enhancements that the vehicle has received. Competition is always stiff, with the winner chosen by Winfield from a “Select Six” group of finalists picked out of an initial field of dozens of candidates.

Considered to be the premier car show in the Northeast, the annual PPG Syracuse Nationals, presented by Your Local Ford Store, this year drew more than 8,000 cars and trucks and 90,000 people from across the United States and Canada to the festive family-oriented event.

Advertisement
In this article:Ford, ppg