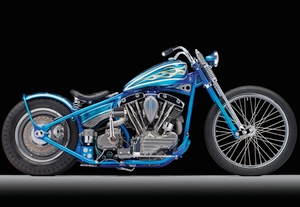 With Blue Baller, Steele and his team at Bill Steele’s Kustoms in Oakdale, Pa., chalked up their third win in the contest. This was Blue Baller’s first award, and the bike was on display at the PPG SEMA exhibit last November. Steele won Bike of the Year in 2009 with “F-2” and in 2007 with “Fascinator” – both of which sported PPG paints.

“I was floored when I found out I won,” said Steele. “It was awesome. I was as excited this time as I was the first time, and I could not have done it without the entire team back at the shop.”

Well-known for his creative use of parts and materials, attention to details and imaginative paint schemes, Steele stayed with his successful formula in building Blue Baller. The motorcycle was assembled with parts salvaged from other bikes. Shop metal master Josh Hart shaped the pieces, while Steele and painter Phil Williams tackled the bike’s finish.