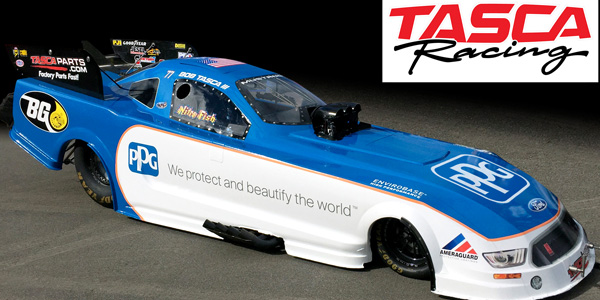 PPG has taken on an expanded sponsorship role with Tasca Racing, furthering its relationship with the popular drag racing team.

PPG has taken on an expanded sponsorship role with Tasca Racing, furthering its relationship with the popular drag racing team.

Tasca will run a full NHRA schedule, and PPG will serve as the team’s primary sponsor for two major events: the Southern Nationals in Atlanta (May 4–6) and the New England Nationals in Epping, N.H. (July 6–8). PPG will be an associate sponsor for Tasca’s remaining NHRA races during the year.

“PPG has supported our race team since Day 1, and we have been a PPG customer for over 20 years,” said Tasca. “I’m thrilled to have them as a primary sponsor for two races this year. It’s exciting to run PPG’s colors. My grandfather coined the phrase, ‘Win on Sunday, sell on Monday,’ and we are laser-focused on doing both. Our PPG Mustang is ready to go, and I’m looking forward to meeting many PPG customers and racing fans at the track.”

Today, along with his responsibilities as head of Tasca Racing, Bob Tasca III is president of the Tasca Automotive Group with eight locations — including new car dealerships, collision centers and service centers — throughout New England. PPG’s Envirobase High Performance is the brand of choice in the company’s four collision centers.

“We’re very excited about supporting the Tasca Racing team,” said PPG’s Shaw. “Our business relationship with Tasca gets stronger each year. We’re happy to be part of the racing culture and work with such a motivated group of guys, a monster car and Bob Tasca in the driver’s seat. That’s a great combination – a winning combination for PPG and Tasca.”

Tasca’s Shelby Mustang consistently hits speeds in the 325-mph zone in just over 3.8 seconds when racing in the NHRA Funny Car category. He has won six national NHRA events.

For more about automotive refinish products from PPG, call (800) 647-6050 or visit www.ppgrefinish.com.

Advertisement
In this article:marketing, NHRA, ppg