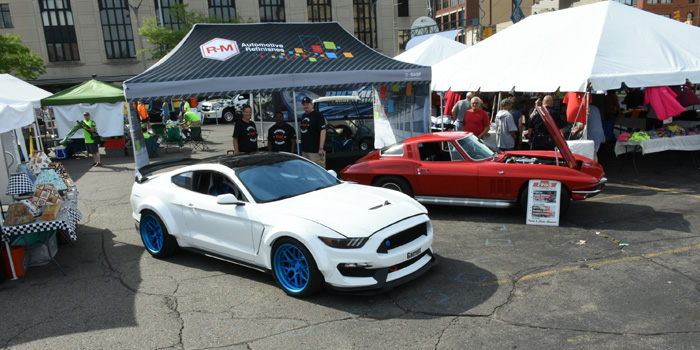 BASF’s R-M automotive refinish paint brand recently served as the Platinum Sponsor for the Back to the Bricks car show in Flint, Mich., for the second year in a row.

The R-M display featured a 2016 Ford Mustang built by Ice Nine Group and owned by Keith Strong, and a 1965 Chevrolet Corvette restored by Randy Misekow Custom Paint and owned by David Spooner.

BASF’s R-M automotive refinish paint brand recently served as the Platinum Sponsor for the Back to the Bricks car show in Flint, Mich., for the second year in a row. With more than 4,000 vehicles on display, thousands of car enthusiasts filled the streets of Flint for the event.

“BASF and the R-M brand were happy to be back for our second year supporting Back to the Bricks,” said R-M Market Segment Manager Mike Freeman. “R-M has been around since 1919, and it’s fun talking to people familiar with the brand who like to reminisce about their cars painted with R-M.”

In 2015, Back to the Bricks introduced “Hot Rod High” as a way to encourage high school students to consider the automotive trade. This year, robotics demonstrations were conducted by Kettering University and several local high schools during the show.

“It’s great that Back to the Bricks is working to get young people involved in the industry,” said Freeman. “BASF supports vocational education through our involvement with the Collision Repair Education Foundation (CREF), I-CAR and several other local vocational programs across the U.S.”

Since 2005, Back to the Bricks has brought together car lovers in a family-friendly atmosphere to celebrate the automotive industry and its role in the history of Flint.

R-M Sponsors 'Back to the Bricks' for Second Year

HD Repair Forum to Offer Fall Event
Connect with us