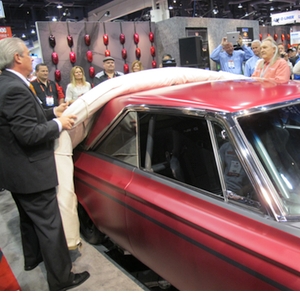 “We set out to design the ultimate street machine that takes a vintage American muscle car with great motorsports heritage and brings it into the modern age,” said Evernham.  “There is not another one like it in the world.  We hope it draws the attention of racing and non-racing enthusiasts, as well as the collector who is looking for that one-of-a-kind vehicle.”

Following SEMA, Evernham will present the ForPly for auction as a featured vehicle at Barrett-Jackson’s Scottsdale auction in January 2013. Net proceeds from the sale will go to Evernham Family Racing for a Reason, a foundation that is funding IGNITE, a new program and facility in Davidson, N.C., operated by the Autism Society of North Carolina.

Housed in the restored body of a near-half-century-old 1964 Plymouth Belvedere – the year, make and model that won the 1964 Daytona 500 and NASCAR Grand National Championship – the ForPly features a Dodge racing powertrain, plus the driveline of a modern day race car that Evernham’s former team Evernham Motorsports built and raced in the NASCAR Sprint Cup Series. 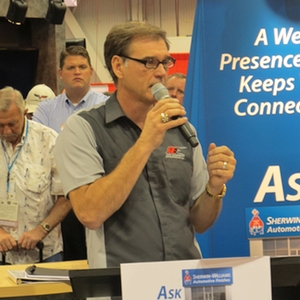 The same technology as used on the ForPly is also now available from Sherwin-Williams in kit format. Planet Color Barrett-Jackson Restoration System Kits contain all of the tools required to mix and prepare primer, color or clearcoat, simplifying the entire paint purchasing process.