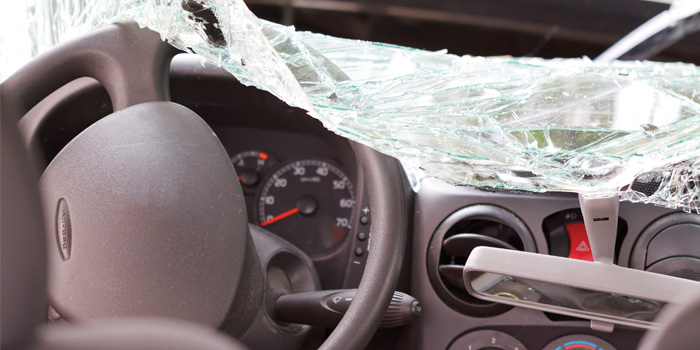 What makes airbags deploy in a collision is many times much different than people think. There are many reasons for them not to deploy in a crash, but one reason they do is the Delta-v, or a sudden change in velocity.

“‘I had a front-end collision. Why didn’t the airbags deploy?’ is a question I get asked by many customers who were involved in front-end collisions. I think the answer would be of great interest to the public.” — Bob Giorlando, manager, Lannan Collision, Woburn, Mass.

What makes airbags deploy in a collision is many times much different than people think. There are many reasons for them not to deploy in a crash, but one reason they do is the Delta-v, or a sudden change in velocity.

Many people think the crushing of metal is what deploys restraint systems. The crushing of metal is a result of a vehicle making contact with another object. The amount of strength of this crushing or strength of the materials has a tremendous influence on Delta-v, or how fast a vehicle decelerates or changes velocity. A stiffer vehicle such as a full-frame truck has a faster change in velocity than a car with a softer structure, thus requiring airbag timing to be adjusted for Delta-v for effectiveness. I do want to make it very clear that the amount of crush to a vehicle is not a qualifier for airbags deploying or not.

Let’s look at how airbags work. In this example, I’ll use front-impact airbags for the driver steering wheel and passenger dash airbags.

The restraint systems, such as seatbelts and airbags, are designed to be force limiters. This means they’re used to reduce the energy of the crash on the human body. Sudden stopping in a crash is detrimental to safety. Seatbelts and airbags reduce the energy of the crash by controlling forward momentum, or controlling the forces reacting on internal organs and the exterior of your body. They slow this reaction at a controlled rate. In a sudden stop or uncontrolled rate of stop, the collision of the moving of your organs to the exterior of your body causes internal injuries, which are the leading cause of death in vehicle collisions. The stretching of the seatbelt to position your body for the airbag to absorb energy limits these life-threatening forces and keeps the spinal column in alignment, preventing neck injuries. This all works as long as the airbag has deployed at the right time. If it fails to do this, there can be some disastrous effects.

Airbags are designed to be fully inflated before the human body contacts them. They fully inflate and deflate in one to two seconds as most crashes are 7/10ths of a second in length. This requires them to deploy at the perfect time, and very quickly.

The average driver airbag deploys at 200 mph, while the passenger airbag is around 371 mph as the distance to the occupant is further away. If the airbag deployed too fast, it would deflate before the human body came in contact and thus would fail in protecting the person. If the airbag is late, the human body gets in the way of it deploying, causing injury or death. The trigger point of all this, established through crash testing, is the Delta-v. The Delta-v at which an airbag must deploy depends on year, make, model and construction. Sensors in vehicles detect Delta-v and react accordingly to save occupants.

During a crash, a series of sensors measure forces of the crash, or Delta-v. If the appropriate level of forces is detected, the computer reacts with an appropriate response. This response may be a seatbelt pre-tensioner by itself or an airbag. The timing depends on the manufacturers and knowing how the vehicle will react or absorb energy in a crash. Any modifications can change the airbag timing. There are also other inputs into a computer which change the reaction of airbags, one of which is seatbelt use. For example, driver’s seat position or weight, or OCS, in the passenger seat. These inputs, along with some others, make sure the seatbelts and airbags deploy as needed. 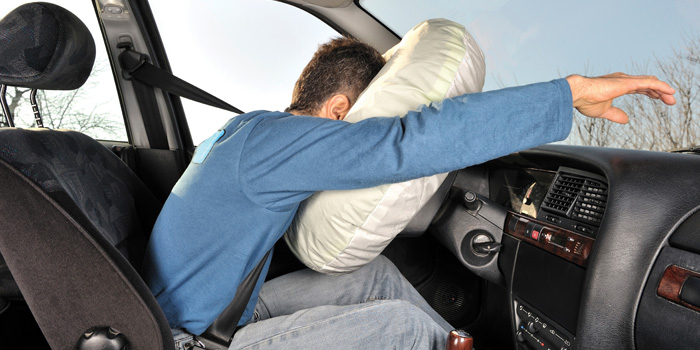 One factor that eludes people on a frontal collision is impact angle. A front impact system will react as long as the Delta-v is within a parameter of force and within 30 degrees of vehicle centerline. This allows the occupants to be going straight into an airbag for maximum effectiveness. If the airbags deployed outside this range, it would limit the effectiveness or cause injury, as the person would be coming at an angle or to the side of the airbag. This bodily damage is better protected by side impact airbags. A crash occurring at an angle or when the vehicle is turning may not deploy airbags to protect occupants.

So the next time you see a pickup that has only minor damage yet the airbags deployed, you know the stiffness of the frame caused a high enough Delta-v to deploy the bags.

You also now know that when you see a car with major crush occurring, those crush and crumple zones absorbed enough of the crash energy to not cause a high enough Delta-v to trigger the airbags. Remember, the angles too may cause a system to not deploy. Front-impact airbags require a Delta-v in forward momentum to deploy.

Advertisement
In this article:airbags, reader's choice

Your Reputation: What Is It Worth?

Skipping Scan Procedures: What You Don’t Know Can Cost You

Who Is Doing Your Diagnostic Scans?

Why Didn't the Airbags Deploy?

Scanning & Recalibration: Is Mobile the Answer?

Electronics and COVID-19: Taking Advantage
Connect with us