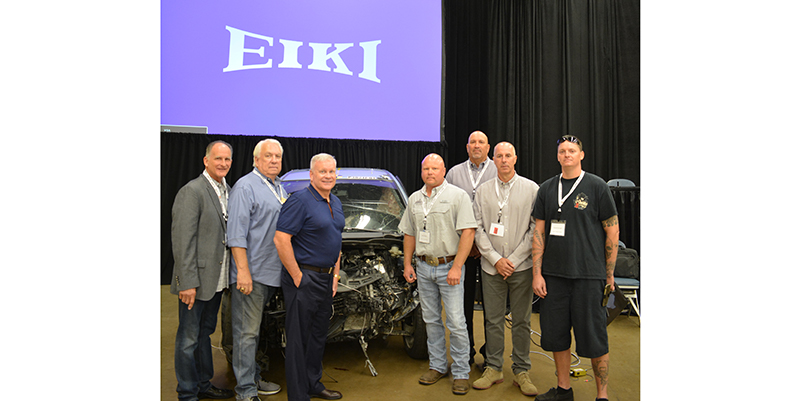 The results of Attorney Todd Tracy’s latest crash test were recently unveiled at the 2018 Texas Auto Body Trade Show in Fort Worth, Texas.
Earlier this year, Tracy commissioned three crash tests of three Honda Fit vehicles using various repair methods and OE and aftermarket parts to determine which vehicle performed the best and protected occupants the most. Tracy is the Texas-based attorney known for his $42 million legal ruling against John Eagle Collision in Dallas. After the results of those tests were revealed, the Insurance Institute for Highway Safety, after analyzing the data, stated that the vehicles still rated as “good” and there was no concern about aftermarket parts.
The new crash test used a 2010 Honda Fit with no prior accidents that was refitted with OEM replacement parts according to the manufacturer’s procedures at Burl’s Collision Center in Henderson, Texas. Tracy then had those same OEM replacement parts replaced with aftermarket parts. Prior to the OEM-specific repairs, the undamaged Honda Fit was thoroughly inspected, measured on a frame machine and pre-repair scanned to check for pre-existing codes. Once the work was completed, Burl’s Collision Center performed a post-repair scan to ensure that no codes were generated during the repair process.
According to Tracy, the test results revealed that the genuine OE parts performed exactly as intended to ensure passenger safety, while the previously crashed vehicle with aftermarket parts installed produced results that Tracy called “total and massive destruction” in critical areas. For example, the driver left femur force on the aftermarket parts-repaired vehicle was 1700 N (newton) but only 397 N (newton) on the vehicle repaired with genuine Honda OEM parts –  a “400 percent difference,” Tracy said. Results of the latest crash test are available at https://goo.gl/epEdFh.
“The biggest takeaway of this presentation is that we’re beginning to define what ‘like, kind and quality’ means,” said Burl Richards, president of the Auto Body Association of Texas and owner of Burl’s Collision Center. “We now have scientific proof that shows vehicles are safer when they’re repaired using OEM parts and OEM procedures. We made major frontal repairs to this vehicle, and its crashworthiness held up and was exactly the same as a new OEM car.”
Jerry McNee of Ultimate Collision Repair, who helped finance this most recent crash test performance at KARCO Engineering in California, added, “Most professional repairers know that aftermarket parts are not the same as OEM parts. However, insurers are willing to twist, turn and use the position statements incorrectly. They make comments like, ‘It’s just a fender,’ ‘It’s in their policy’ and ‘LKQ parts are the same.’ They’re dictating what they’re paying for to unjustly enrich themselves, but numbers and test results don’t lie. This OEM-repaired car fared exactly like the undamaged Honda Fit. When there is a 400 to 800 percent difference in the results between the OEM-repaired car, the aftermarket-repaired car and the improperly repaired car, it’s staggering. This could be the difference between broken bones, permanent injuries, life or death – or, in the Honda Fit case, people trapped helplessly while their vehicle is on fire. Mr. Insurance Company, please tell me how these parts are the same and ‘like kind and quality.’ Show me the proof! Would you put your kids in an improperly repaired car? Do you feel lucky? Your odds are 400 to 800 percent.”
In addition to McNee, Burl’s Collision Center and the Houston Auto Body Association, financial contributors to the latest crash test include Dominic and Mario Martino of Gold Coast Auto Body in Chicago and John Mosley of Clinton Body Shop in Mississippi.
“By dictating improper vehicle repairs for decades, insurance companies have killed thousands of customers who were driving around in time bombs,” said Tracy. “Your industry has to work together with politicians and state agencies so that insurance companies stop jeopardizing family safety.”