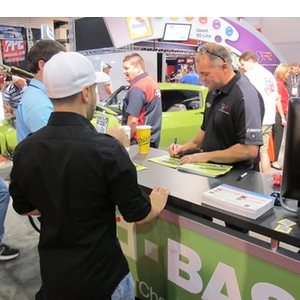 With their 1970 Chevy Camaro appropriately named the "Grinch" due to its Custom Green Glasurit 90-Line paint scheme serving as a backdrop, Mike and Jim Ring from Ringbrothers signed autographs yesterday at the BASF booth 21455 in the Racing & Performance section.

Other vehicles were displayed in the booth as well featuring BASF’s Glasurit and  R-M waterborne paint systems, including a 1948 Cadillac Eldorado "Eldorod" from Chip Foose, the 2012 Ridler Award-winning 1955 Ford Thunderbird and a restyled 1967 Shelby Mustang GT 500.

Foose, a nationally known television personality, automotive designer and owner of Foose Design, unveiled his Eldorod that he restyled and painted with a custom blended Deep Blue from BASF’s Glasurit 90-Line waterborne system. Foose will be at the BASF booth to sign autographs today from 10 a.m. to 11 a.m., and on Friday, Nov. 2 from 1 p.m. to 2 p.m.