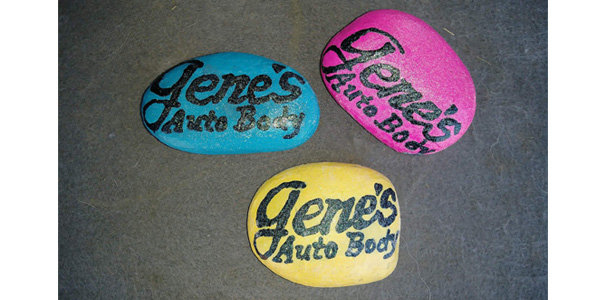 Looking for low-cost marketing ideas that rock? You might want to talk to Brandy Tyler, office manager at Gene’s Auto Body in Pontoon Beach, Ill.

Looking for low-cost marketing ideas that rock? You might want to talk to Brandy Tyler, office manager at Gene’s Auto Body in Pontoon Beach, Ill.

Tyler comes up with a monthly contest to promote the collision repair shop, using Facebook to get the word out. Her most recent idea was a rock-finding contest, which, to her surprise, was one of the shop’s more popular contests.

In September, Tyler painted the Gene’s Auto Body logo onto three rocks, hid them in various places throughout the community, and posted clues to their whereabouts on Facebook. Whenever someone found a rock, they brought it to the body shop to receive a Walmart gift card.

The contest played off a trend that Tyler had been seeing in the shop’s Facebook news feed. She noticed that nearby communities had been hiding rocks – painted with uplifting or funny messages – and posting photos when people found them.

“Instead of just hiding the rocks in hopes that somebody would find them, I decided to do a scavenger hunt,” Tyler told BodyShop Business. “So I hid the rocks, and before hiding them, I came up with clues that I could post on a daily basis pointing people in the direction where the rocks were.”

To make sure that nobody knew where they were before the contest started, Tyler and her teenage son hid the rocks in the dead of night – one at the local high school, one on the side of an interstate and one underneath the “Welcome to Granite City” sign (Granite City is next to Pontoon Beach).

Facebook is the body shop’s primary means of marketing the business. Tyler said the shop doesn’t advertise, and it doesn’t use Twitter and Instagram. “A lot of the people on Twitter and Instagram are younger, and their parents are still paying for their insurance,” she added. “They’re not paying to get cars repaired out of pocket.”

In October, the shop held an online costume-photo contest, with a pumpkin-carving kit as the prize (although Tyler admitted that the contest didn’t generate much interest). In November, the shop will reprise its Thanksgiving turkey giveaway, this time with all the fixings. In December, the monthly contest will have a “12 Days of Christmas” theme.

Each contest is promoted on Facebook, and each one has a simple objective: to let people know that the shop is there.

“I get a lot of customers from town who will call and say, ‘Where are you located?’” Tyler explained. “We’ve been in the same location for 30-something years. For people to live in town and drive past us everyday and not know that we’re even here – that’s what we’re trying to change. We want to make sure everybody knows where we’re located.” 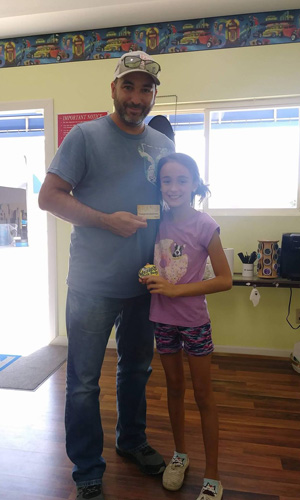 When the first rock was found, Tyler shared the photo on the shop’s Facebook page.

When planning future promotions, Tyler uses Facebook as a market-research tool. She looks at the shop’s Facebook followers and tries to get a feel for their hobbies and interests. “If it’s something they’re interested in, maybe we can get them to participate. Then they share it, and we get other followers that way.”