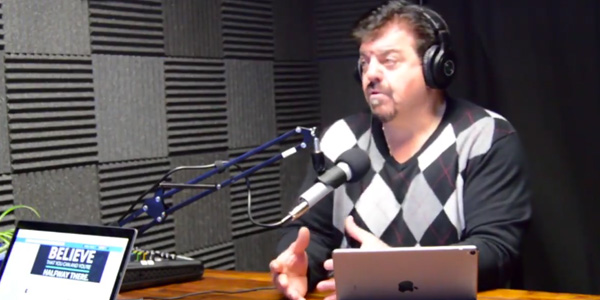 There’s a lot to talk about in the collision repair industry. And Ron Perretta wants to help lead the conversation.

There’s a lot to talk about in the collision repair industry. And Ron Perretta wants to help lead the conversation.

Perretta said the goal of “Body Shop Pioneers” is to share the stories of collision repairers who are moving the industry in a positive direction.

“I see a lot of things on Facebook that people are almost treating as gospel. I think some of it is, but the majority of it isn’t,” Perretta told BodyShop Business. “So we thought let’s put a podcast together that puts out some good information, bring guests on from around the industry who are making a difference out there, and interview them about some of the things that they’re doing.”

Perretta is no stranger to the microphone – or the camera. For years, Perretta has been promoting his shop in TV and radio spots. He even built a soundproof studio in his Duncansville, Pa., facility to make commercials, seeing that as a more affordable alternative to using ad agencies.

“At one time, I’d spend $3,500 to have a 30-second commercial produced and shot,” Perretta said. “You do that year after year and you start thinking, ‘Geez, could I do that myself? I could do it on my own time instead of scheduling it,’ and that’s how it evolved to start doing our own commercials in our studio. And then we started adding equipment, and then we started doing commercials for other shops around the country, for the same reason.”

In his first podcast – posted March 27 to the “Body Shop Pioneers” Facebook group – Perretta chats with Jamie Robison, his marketing manager and sound engineer. Robison, a Penn State grad with a degree in graphic design, started out as a detailer at Professionals Auto Body. For the past five years or so, though, he’s been helping Perretta with his marketing and advertising efforts, which span TV, radio, print, billboards, YouTube and social media.

Guests for future podcasts will be a bit more well-known to the collision industry: Don Richardson, owner of Pike Collision in Petersburg, Ind., and Tony Passwater, president of the consulting firm AEII, will be among them.

“There are people out there in the industry who are making a difference, who are very passionate about the direction that the industry is going,” Perretta says in the first podcast. “And one of the things I wanted to do is bring people on, whether we Skype with them or whether we just do a phone call with them – because we have the capabilities – and talk about the things they’ve done to make some changes in the industry … and hopefully inspire other shops and owners, managers and technicians to do the same. If we’re all rowing in the same direction, we’re gonna get there a heck of a lot quicker.”

When Perretta and Robison began outfitting the studio for podcasts in January, finding the right gear was only half the battle. Perretta wanted to have the capability to chat with guests via Skype or phone and to record those conversations, and they needed to be able to connect the microphones, cameras, mixers, speakers, phones and tablet computers so the host and guests can hear or see each other while Perretta is recording.

“It was not an easy process,” Perretta told BodyShop Business. “ … There are still some adjustments that need to be done, and we’ll do that as we go. But we’re pretty happy with it at this point.”

The next step is to post the podcasts on iTunes for downloading. After that, Perretta would like to see the podcast evolve into a national radio show.

Said Perretta: “If we can get the industry to hear that the stories of the people we’re interviewing are [similar to their own stories] – so they don’t feel that they’re the only ones in their market or in their state – I think we can make a big difference.”