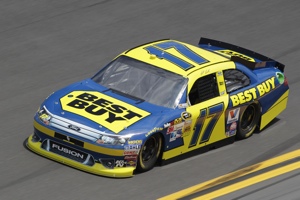 Delayed from its traditional Sunday start because of weather concerns, the 500 still boasted more than 182,000 fans in the stands and 36 million more watching worldwide as Kenseth maneuvered his Best Buy Ford Fusion to the front of the pack and held on for the last few laps.

According to a Roush Fenway announcement, the new winner said, "We had a really fast car all day and had a great pit stop at the end that put us into position. It feels great. I wasn’t expecting to win when I woke up this morning so it feels really good to be sitting here."

"This is a special night," said team co-owner Jack Roush. "It feels great. It is very fitting that Matt won the 300th victory that we have had since we started in 1988. It is great to celebrate our 300th win here with the 54th Daytona 500. This is Matt’s second 500 win and that makes it special as well."

For years, some of the biggest names in racing have trusted their race car finishes to Sherwin-Williams, the company says.

"More than a dozen NASCAR teams currently use Sherwin-Williams Automotive Finishes," said Bobby Moody, director of Motorsports for Sherwin-Williams Automotive Finishes. "We aim to help teams cross the finish line and ensure that their cars and their sponsors always look good circling the track. This victory also represents yet another win for a car painted in AWX waterborne coatings."

With Kenseth’s win, he and the 30-plus other drivers who now use Sherwin-Williams finishes have more than 200 NASCAR Sprint Cup victories between them.