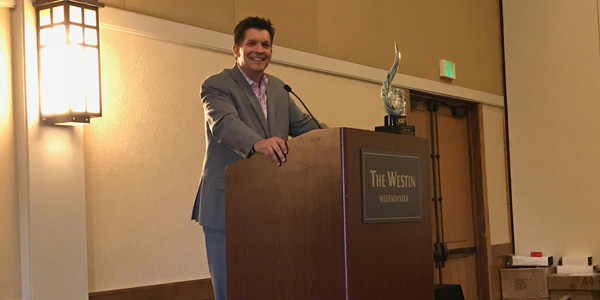 The Society of Collision Repair Specialists (SCRS) honored Mike Anderson and John Yoswick for the “Who Pays for What?” surveys and Bill Shaw for his contributions to the Collision Industry Foundation (CIF) during an April 11 awards luncheon in Westminster, Colo.

The Society of Collision Repair Specialists (SCRS) honored Mike Anderson and John Yoswick for the “Who Pays for What?” surveys and Bill Shaw for his contributions to the Collision Industry Foundation (CIF) during an April 11 awards luncheon in Westminster, Colo.

Launched in 2015, the quarterly “Who Pays for What?” surveys ask body shops to indicate whether or not the eight largest U.S. auto insurers are compensating them for various not-included repair operations. Each survey covers a different aspect of the repair process: refinish operations; body repair operations; aluminum repair and shop supplies; and frame and mechanical repair.

SCRS Treasurer Amber Alley presented the award, asserting that the “Who Pays for What?” surveys have “helped reshape the conversation that so many of us have on a daily basis.”

“It has provided the industry with a tool that has made negotiations more transparent, and for many of us, it has made this complicated industry feel a little more manageable,” Alley said. “As a shop operator, I find this resource to be valuable beyond words. It has given me and my shop the confidence to say I know I’m not the only one anymore.”

Anderson, a popular collision industry speaker and consultant who travels more than 300 days a year, wasn’t able to attend the SCRS awards luncheon in Colorado. Yoswick, publisher of the CRASH Network, accepted the award. 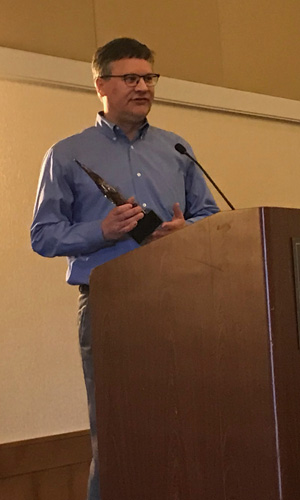 “In addition to Mike [Anderson] and his crew at Collision Advice, and Chuck Cogan and I at CRASH Network, while we’re grateful to receive this, it’s the 3,237 people who have taken at least one of the surveys … who really make this possible,” Yoswick said. “Because if you don’t continue to share a little bit of your information, we can’t give back to the industry the complete information that we do.”

Jeff Wildman, manager of OEM and industry relations for BASF, presented the SCRS Humanitarian Award to Shaw, noting that Shaw is “an obvious candidate” who defines the attributes of the award.

Launched after Hurricane Katrina, the Collision Industry Foundation provides emergency relief to collision repair professionals and their families in the wake of hurricanes, floods and other disasters. Shaw has been “instrumental” in ensuring that the foundation fulfills its mission, Wildman noted.

“I’ve asked several people how long [Shaw] has been in this role … and everybody has given me the same answer: ‘Well, he was already here when I started,’” Wildman said. “He’s been here a long time. … So I don’t know how long Bill’s been doing this, but as president of CIF today, I’d like to recognize Bill Shaw for his contributions that have been a huge factor in the success, sustainability and direction of the CIF organization.”

Shaw noted that the CIF helped more than 78 collision repair professionals and their families last year, many of whom were affected by Hurricanes Harvey and Irma.

“It’s just a real joy to work with everybody … we have a great group,” Shaw said. “I was born and bred in this industry. I’m the proud son of a family of 10. My dad owned a body shop … and I never left the industry because of people like you.”

SCRS Vice Chairman Brett Bailey noted that the association doesn’t have a predetermined number of awards to dole out each year. The SCRS Nominations Committee “works tirelessly” to make sure that the association is recognizing individuals and organizations based on their achievements and at the right time, he said.

“These are truly special awards that are being given out, and very deserving for those individuals who receive them,” Bailey added.

Advertisement
In this article:awards, cif, SCRS