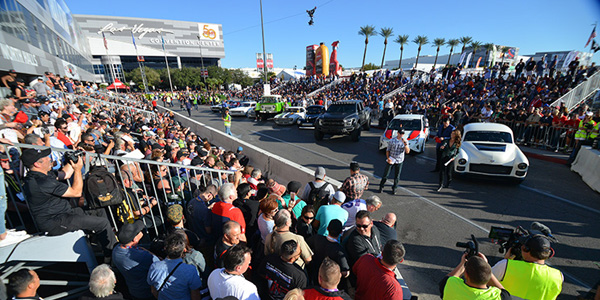 More than 250 vehicle builders will compete in the fourth annual SEMA Battle of the Builders competition, with the finalists announced during the 2017 SEMA Show in Las Vegas, and the winner announced during the nationwide television taping at SEMA Ignited on Friday, Nov. 3.

SEMA Show exhibitors enlist top vehicle builders to create custom cars and trucks that will generate worldwide attention and stand out at the show each year.

More than 250 of these builders will compete in the fourth annual SEMA Battle of the Builders competition, with the finalists announced during the 2017 SEMA Show in Las Vegas, and the winner announced during the nationwide television taping at SEMA Ignited on Friday, Nov. 3.

“It’s great to see the amazing array of vehicle builds at the SEMA Show each year,” said Peter MacGillivray, SEMA VP of events and communications. “It’s inspiring to watch the SEMA Battle of the Builders competition, as we meet the builders and learn about the products and stories behind the cars and trucks.”

All SEMA Battle of the Builders competitors are recognized in SEMA Show publications and on signage at the event. During the show, finalists are narrowed down in three categories (Hot Rod, Truck and Tuner) and the winner is announced Nov. 3 at SEMA Ignited, the official SEMA Show after-party where thousands of consumers join SEMA Show attendees.

This year’s competition includes special recognition of builders 27 years or younger, named “Young Guns,” who enter the contest with a vehicle at the SEMA Show.

The recognition serves to inspire and encourage young builders to pursue their passions and shine the light on the up-and-coming customizers, including a select number of young vehicle builders who were awarded a Young Guns prize package from partnering consumer auto shows. The prize package includes an invitation to bring their vehicles to the SEMA Show and compete in the 2017 SEMA Battle of the Builders.

The competition and its builders, vehicles and manufacturers are profiled in a one-hour television special that will air exclusively on the Velocity Network in 2018. Exclusive online footage is also posted at www.sema.org/botb, featuring additional behind-the-scenes stories and interviews.

Advertisement
In this article:SEMA Battle of the Builders, Specialty Equipment Market Association

Pre-Register for Collision P.R.E.P. at NORTHEAST

SEMA Battle of the Builders to Feature Top Customizers

SCRS Announces Feature Presentation for Repairer Roundtable
Connect with us