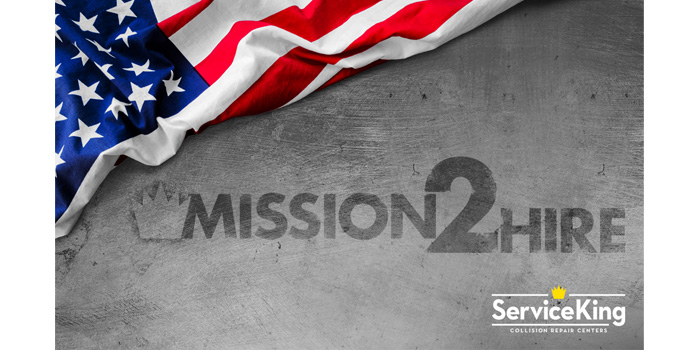 MSO pledges to hire at least 500 U.S. Armed Forces veterans, their spouses or active duty personnel within the next five years.

The Mission 2 Hire initiative is a pledge by Service King officials to hire at least 500 U.S. Armed Forces veterans, their spouses or active duty personnel within the next five years. The figure equates to about 10 percent of Service King’s current staff across its network of more than 235 collision repair facilities in 21 states.

“By nature, military personnel posses some of the most valuable skill sets that we look for in our hiring process,” said Service King CEO Chris Abraham. “U.S. Armed Forces veterans and their family members have bravely served our country and fought for our freedom. Now, it’s our turn to serve them as they make the difficult transition to civilian life. We’re honored and deeply humbled to provide rewarding career opportunities at Service King for these heroes through our Mission 2 Hire initiative.”

As part of the Mission 2 Hire initiative, Service King is partnering with USAA and Hiring Our Heroes as well as other veteran assistance programs across the country to promote career opportunities for military veterans in the industry. Service King’s initiative launched as an extension of private equity investor Blackstone and its sweeping Veterans Initiative, which aims to hire a total of 50,000 veterans across its portfolio.

“Service King’s Mission 2 Hire initiative is a strong step forward in promoting valuable career opportunities for our military veterans and their spouses,” said Sandy Ogg, operating partner, Blackstone. “Service King offers a wealth of career paths in the automotive repair industry that coincide with the very skill sets that so many veterans already possess. This long-term commitment, in conjunction with Blackstone’s very own Veterans Initiative, is poised to make a difference in the lives of thousands of our military heroes.”

In addition to its hiring commitment, Service King has launched a new website, www.Mission2Hire.careers, specifically tailored to military veterans and their families. The site aims to serve as a portal of information about Service King while operating as an intuitive platform to match existing skill sets with complementing careers in the collision repair industry.

Service King will also celebrate current military veterans and their families on the official company blog, The Service Advisor, and across its social media channels throughout the month of May.

Advertisement
In this article:Consolidators and MSOs, mission 2 hire, service king