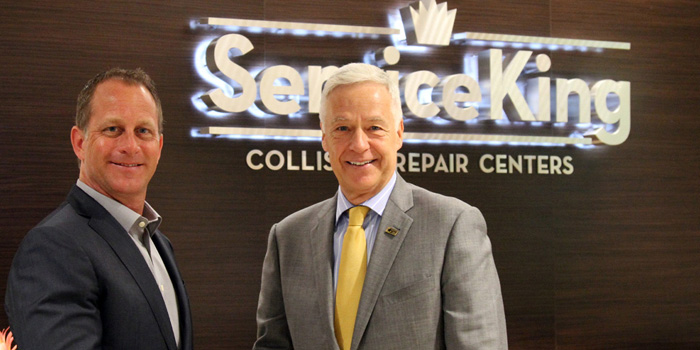 The event took place inside Service King’s home office, where Abraham and Service King teammates provided an overview of the organization’s ongoing Mission 2 Hire initiative, an effort that has recruited and hired 94 military veterans in 10 months. Meanwhile, Michaud and his team shared several insights into apprenticeships and programs that take proactive steps toward employing veterans.

“It’s an honor to meet with Mr. Michaud as together we’re working toward ensuring our nation’s heroes are provided attainable career opportunities upon returning home from service,” said Abraham. “We’re incredibly proud of Mission 2 Hire and hope to take inspired steps forward to broaden its impact for our servicemen and women and their families across the U.S.”

Service King’s Mission 2 Hire initiative publicly aims to combat the reported 500,000 unemployed military veterans currently looking for jobs. Launched in May 2015, Service King is actively pledging and currently on pace to recruit and hire 500 veterans across its organization in five years.

Michaud was nominated to his current post by President Barack Obama and confirmed by the U.S. Senate before being sworn in on Dec. 2nd, 2015. As the assistant secretary of labor for VETS, Michaud gives leadership to the agency responsible for preparing transitioning service members and veterans for meaningful careers.

Prior to his current role, Michaud represented the 2nd Congressional District of Maine for 12 years. During that time, he served as the ranking Democrat on the House Committee on Veterans Affairs.