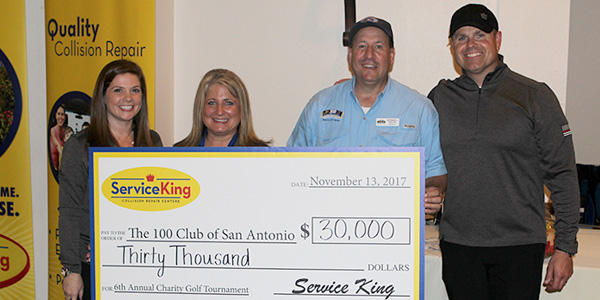 The tournament took place at Fair Oaks Ranch in San Antonio and drew more than 150 golfers. The 100 Club is a local citizen-based organization dedicated to raising funds for families of fallen first responders across the community.

“The 100 Club of San Antonio is most appreciative of the sincere generosity of Service King and their partners,” said Richard Miller, president of The 100 Club of San Antonio. “This significant donation will further our mission to serve the children and families of our fallen first responders in providing financial assistance within 24 hours of a loss and assisting with higher education needs for their children.”

The $30,000 donation came after the San Antonio community lost two local law enforcement officers and one local firefighter in the line of duty this year. With the help of The 100 Club, proceeds raised from the event will directly support families of fallen heroes.

“The Service King family is honored to present this small token of our deep appreciation for The 100 Club of San Antonio,” said Jason Peel, Service King market vice president for South Texas. “It’s our hope these proceeds further the mission of serving children and family members of fallen first responders across the community.”

In the six-year history of the Service King San Antonio Charity Golf Tournament, the organization has raised more than $190,000 for local nonprofit organizations like The 100 Club.