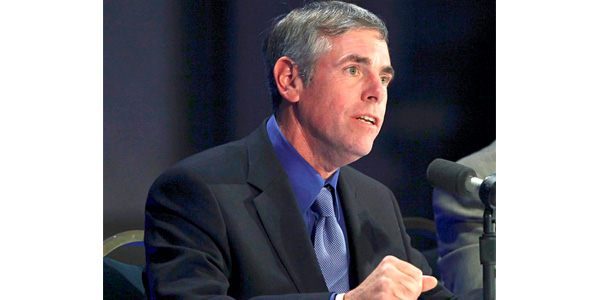 Shawn Moody, founder and owner of Moody’s Collision Centers in Maine, recently threw his hat in the ring for the state’s 2018 gubernatorial election.

Shawn Moody, founder and owner of Moody’s Collision Centers in Maine, recently threw his hat in the ring for the state’s 2018 gubernatorial election.

Moody, who finished fourth in the 2010 Maine election as an independent, will run as a Republican this time.

Moody made the announcement at his MSO’s headquarters in Gorham, Maine, where he grew up and lives now.

“I am a common-sense conservative, and that’s the way I’m going to lead this state,” Moody said as he announced his candidacy. “ … I don’t think there’s anybody out there who knows more [about] the value of a dollar but also knows the value of people.”

Moody noted that his company gives 10 percent of its after-tax profits back to its employees, and gives associates access to financial information such as revenues, profits, KPIs and its customer-satisfaction index.

“We have to take care of our customers in order to stay in business and to grow,” he said. “What’s Congress’s approval rating? 12 percent? Our customer-satisfaction rating is 98 percent, because we’re held accountable.”

Moody grew up in a trailer park in Gorham, raised by a single mom. At 13, Moody started working on cars as a hobby.

In 1977 – when Moody was a senior in high school – he opened Moody’s Body Shop in his mom’s garage. Since then, the business has grown to 11 locations and nearly 200 employees.

“Moody’s employees are collectively co-worker owners,” his campaign website explains. “Moody’s employee ownership is a reflection of Shawn Moody’s approach to problem solving, which is based on empowering people and challenging them to achieve success, which benefits everyone from the top-to-bottom of an organization.”

Moody finished fourth out of five candidates in the 2010 Maine gubernatorial election, capturing 5 percent of the vote. But an op-ed in the Portland Press Herald suggests that Moody’s second run, as a Republican, could make the governor’s race “interesting.”

Columnist Bill Nemitz asserts that “Moody’s magic” is that he is a fiscal conservative “who will wear a pair of sneakers until they’re literally falling apart, yet at the same time a businessman who sees solar power not as a leftist plot, but rather as a sound investment in the future.”

“When I was 13 years old … I can remember lying in the bed next to my mom in a mobile home, and she was crying herself to sleep,” Moody said during his candidacy announcement. “And anybody who’s lived in a mobile home knows the walls are pretty thin. And I said to myself then, ‘Somebody’s got to get ahead here.’ And every morning since, I’ve woken up with one thing on my mind: ‘I’m not going to get by, I’m going to get ahead.’ And that’s what Maine needs to think, every individual in the state. We’re tired of getting by. It’s time for Maine to get ahead.”

Advertisement
In this article:Consolidators and MSOs, Maine, Personnel