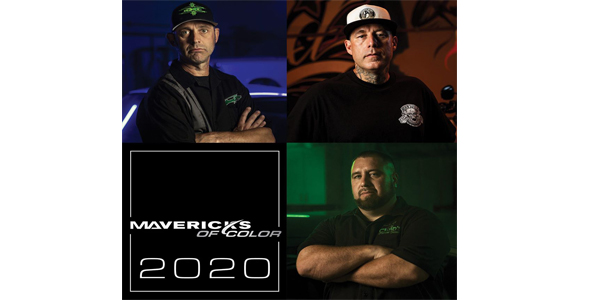 “The Matrix brand really has a following – a following that inspired this whole idea of a Maverick of Color,” said Rob Mowson, vice president of marketing, Sherwin-Williams Automotive Finishes. “That was 2016, and now we have 12 true brand ambassadors – devout users who know the product line inside and out and speak to the brand’s performance every day in their business.””

Added Ryan Evans, lead painter at Count’s Kustoms and a 2016 Matrix Maverick of Color, “A Maverick to me is any painter that can create just as many problems as they solve. It’s someone who doesn’t get it right out of the gate, but because of their experience, they can fix it at the drop of a hat.”

Evans was one of the first Mavericks of Color in 2016, along with Cody Lumpkin from Dick Lumpkin’s Auto Body in Piqua, Ohio, and Automotive Services Inc.’s Shane Marchyshyn in Columbus, Ohio. In 2020, Ramirez, Knowles and Martin are front and center for the Matrix brand.

Michael Ramirez, who is better known as “Buck,” is an established custom painter and artist specializing in motorcycles and premium builds in his L.A. shop. Recognized by his peers for his gift with the brush, Buck is at the top by industry standards and a Maverick. In addition to sheer talent, he’s a teacher and mentor representing not only Matrix to up-and-comers but the custom industry at events like Brushmasters each year.

Chad Martin from Saluda, S.C., burst onto the scene last year at SEMA with an over-the-top custom truck in the Sherwin-Williams Automotive Finishes booth. That truck has since racked up industry accolades across the country, including a Winfield Select Six nod and a potential Hot Wheels Legend award at this year’s SEMA Show – putting Chad’s Custom Dreams, a small but mighty custom and refinish shop in the Deep South, on the map and solidifying Martin a Maverick spot in 2020.

Brandon Knowles has been working on cars since he can remember. A fourth-generation shop owner, custom builder and refinisher, he has built Brand-X Customs from the ground up. Situated in Everett, Wash., just outside of Seattle, Brand-X is recognized for its collision repair work as well as custom creations. In 2017, “Josephine,” a Ford Mustang Fastback by Knowles and his team at Brand-X, captured the attention of not only car lovers at SEMA but the Matrix brand team. And now, Knowles becomes a Maverick.

The Sherwin-Williams Automotive Finishes booth (no. 10839) is located in the North Hall of the Las Vegas Convention Center at the 2019 SEMA Show in Booth No. 10839. For more information about Matrix refinish system and the Mavericks of Color program, visit matrixsystem.com.