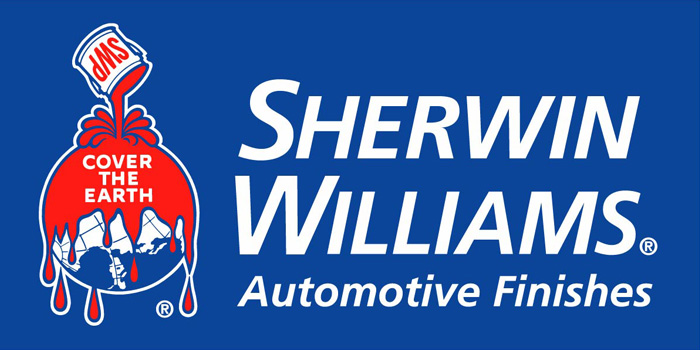 Sherwin-Williams Automotive Finishes is transporting SEMA attendees back in time with a vintage body shop-themed booth (no. 11339, North Hall) at SEMA 2018.

Sherwin-Williams Automotive Finishes is transporting SEMA attendees back in time with a vintage body shop-themed booth (no. 11339, North Hall) at SEMA 2018.

The booth is designed to resemble a body shop during a time when automotive refinishing was coming into its own. Cleveland-based design studio Communications Exhibits, Inc. (CEI) developed and constructed the 50 x 70 booth using a combination of galvanized steel, reclaimed wood and chicken wire. Period-specific vintage advertising, tools and signage throughout the booth add authenticity to the unique booth concept, creating an interactive display of not only where the industry has been, but also where it may lead.

That first transportation-related paint by Sherwin-Williams was a paste-based product called Q.D. Coach Colors — as in “Quick Drying” colors for coaches — introduced not long after the first carriage accident was reported in the mid-1880s.

“Sherwin-Williams was there for the birth of the automotive refinish industry,” said Rob Mowson, vice president of marketing, Sherwin-Williams Automotive Finishes. “The company was present yet again when the need emerged in collision repair, another new industry.”

In the mid-1950s, Sherwin-Williams sought to help customers improve performance and reduce costs by developing a single product combining the speed of its lacquer systems with the characteristics of an enamel finish. The result was the industry’s first acrylic enamel, vaulting Sherwin-Williams from a modest position in the automotive aftermarket industry to number two in the country in the 1960s.

By 1970, Sherwin-Williams had 50 automotive finishes service centers across the U.S.

Today, Sherwin-Williams Automotive Finishes continues its tradition of innovation by regularly introducing refinish systems and premium products such as CC200 Premium Clearcoat, introduced at the 2017 SEMA Show and this year with the new waterborne basecoat system, Ultra9K.

“Our presence this year at SEMA drives home not only our historical influence in automotive, but also the direction we’re headed with the integration of Valspar,” said Mowson. “The scale of the booth and the overall design direction should be clear indicator to the industry and everyone at the show where Sherwin-Williams has been and where we’re intend to take the industry.”

The latest result of Sherwin-Williams’ dedication to innovation is on full display with a 1949 Hudson finished with Sherwin-Williams’ new Ultra 9k Waterborne Basecoat System. “Past truly meets present with this vehicle,” said Mowson.

And, because no classic body shop is complete without a run of classic builds, the Hudson is joined by a 1955 Chevrolet Gasser, 1968 Chevrolet Camaro and a 1936 Chevrolet Master Sedan Custom Truck.

For more information about Sherwin-Williams Automotive Finishes, visit booth #11339 at the 2018 SEMA Show, or visit https://sherwin-automotive.com

Advertisement
In this article:Sherwin-Williams Automotive Finishes

Pre-Register for SCRS Open Board Meeting