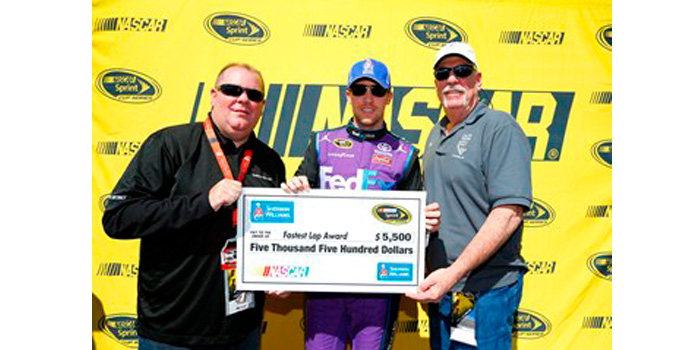 Award recognizes eligible drivers who turn the fastest lap of each NASCAR Sprint Cup Series race throughout the season.

The Sherwin-Williams Fastest-Lap Contingency Award recognizes the eligible driver who turns the fastest lap of each NASCAR Sprint Cup Series race throughout the season. Each week, the award winner receives $5,500 per race, and then a check for $100,000 is presented to the overall winner at the end of the season.

Last year, Matt Kenseth, driving the No. 20 Toyota Camry, won the Sherwin-Williams Fastest Lap annual award and $100,000. He was honored at NASCAR’s Myers Brothers Awards Luncheon in Las Vegas. With the 2015 racing season well under way, NASCAR and Sherwin-Williams announced the first 10 weekly winners of the “Fastest Lap Award” which include:

Sherwin-Williams is in its second year as a Contingency Sponsor in the NASCAR Sprint Cup Series and NASCAR Touring & Weekly Series.

Advertisement
In this article:nascar, sherwin-williams

HD Repair Forum to Offer Fall Event
Connect with us