With ingenuity and innovation, Eddie’s Auto Body has transformed itself into a lean, mean and efficient machine.

Gina is a 2012 graduate of the E.W. Scripps School of Journalism at Ohio University. A resident of Akron, Ohio, she currently serves as managing editor of BodyShop Business and previously held internships with multiple consumer and B2B publications. She is a member of the Women's Industry Network.

Eddie Lupinek is always thinking one step ahead, striving for constant improvement in his shop’s operations. His forward-thinking mindset comes from years in the business – or rather, his entire life.

“I waited for the kindergarten bus at the shop,” he recalls. “I grew up there.”

Back then, Eddie’s Auto Body was owned by his father, also named Eddie, who started the business after leaving the army in 1956. Originally located inside a Chevy dealership, the shop quickly began to see an increase in business. Soon, Eddie’s outgrew the dealership and moved to its current location in an industrial park in 1986.

“It’s a very rural, small town in Connecticut,” he said of East Haddam, Conn. “We overlook a skating pond. It would actually be a beautiful place for a house.”

As an innovator, Eddie looks to factors he can control in order to improve his shop’s efficiency, including equipment. He had wanted to redesign his cross-flow booth for months, but just couldn’t figure out how to accelerate the curing process. He and his wife, Carol, discovered the missing link at a trade show last year: a medium-wave infrared drying system from SunSpot.

“They gave us the ability to go outside the box with spraybooth design,” he said.

Installing the drying system into the booth allowed Eddie to create a drive-through setup, which lets cars leave the shop right from the booth. The new renovation, which merely heats paint film without any air movement, allows water-based color to dry in six minutes, with clearcoat only taking 10 minutes to feel like it has dried overnight.

“It gives us a real edge in that it saves us a lot of time in moving cars and bay tie-up time,” said Eddie.

Eddie’s spraybooth doesn’t have an air make-up unit, but instead uses a “clean room” that takes air from the shop’s ceiling and filters it three times. This process generates a consistent flow of warm air before it enters the booth. This not only makes the work environment efficient, but also safe. “The body men are getting fresh air and using it first,” he explained.

The booth redesign also presents a cost savings to the business. While most shops spend about $25 per bake cycle, Eddie is spending only 30 cents.

“It’s very energy efficient, and it’s very safe for the employees,” he said. “For all our curing, we’re using the equivalent [amount of propane] of a gas grill per month.”

Custom Gadgets
The redesigned booth isn’t the only innovation of Eddie’s. He also takes pride in his custom bumper rack that he attached to a garage door opener. With a remote control or wall-mounted unit, the bumpers are safely lifted out of harm’s way up to the ceiling, theoretically adding an extra bay of space.

“Whatever can get mounted on the wall, does,” said Carol. “We’re always looking for ways to make the shop cleaner and run more efficiently.”

Eddie also recognizes how important it is for his employees to have a clear view of what they’re working on. To fulfill this need, he affixed a waterproof spraybooth light to a base with wheels to create a portable, ultra-bright lamp. It even includes a handle so users can pick it up and carry it around.

“It takes ups very little space, about the size of a person standing, and it has an extension cord built right into it,” said Eddie. “We’ve been on a very extreme course on finding ways to continually make the shop run better.” 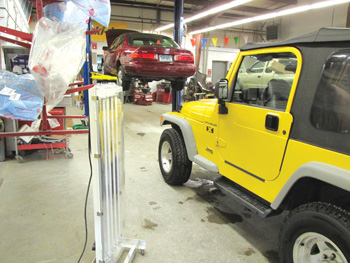 That goal goes for the shop’s operations, too. Every Sunday, cars that are due for repair are dropped off at the shop by 5 p.m. Eddie then draws up each car’s location on a sketch pad and arranges them in the shop accordingly.

The next morning, the techs come in to find each car’s parts laid out and ready to go. “It saves hours every week by bringing the cars in on Sunday night,” he said.

Maximizing Space
Eddie and Carol are planning an addition to their shop, which will include an extra customer waiting area and a drive-in estimating bay with a lift and wash bay.

“Oftentimes in the winter, you have to rinse off a vehicle before you can assess damages because there’s so much snow and gunk on it. It just makes sense,” said Carol.

The addition will also include a parts room. Instead of having parts delivered through the shop and into a tech’s workspace, they’ll be delivered to a reserved space that doesn’t interrupt their work. The couple also hopes to incorporate solar panels into the shop design.

“We’re moving forward in hopes of going as green as possible,” said Carol. 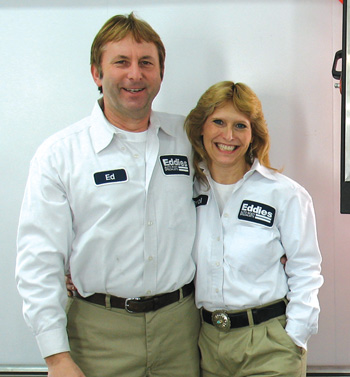 Customer Advocacy
If you visit the website for Eddie’s Auto Body at www.eddiesautobodyct.com, one of the main things you’ll notice is the great amount of information related to consumer rights and car repair. As the former president of the Auto Body Association of Connecticut (ABAC) and a current member of its Board of Directors, Eddie feels that it’s his duty to protect his customers’ rights by being honest and fair with them.

“We educate them on their choice of the parts to be put in their cars,” said Carol. The couple has aftermarket parts in the shop to show to customers, but chooses to exclusively use OE parts.

“I find it to be really helpful to tell the truth and tell the customers how things really are,” said Eddie.

Eddie’s Auto Body used to have six DRPs, but eventually eliminated them because of their restrictions. Not having any hasn’t affected business, though.

“We’ve found that [by] being very transparent and truthful, the customers appreciate that,” said Eddie. “We’re busy, even when direct repair shops are slow, because of our very strong customer base.”

It seems that the sky is the limit with Eddie and Carol’s business. By putting customers first and educating them about collision repair as much as possible, as well as by maximizing efficiency through creative inventions, Eddie’s Auto Body hopes to thrive for years to come.

Frank Bird: New Publisher of BodyShop Business
Connect with us