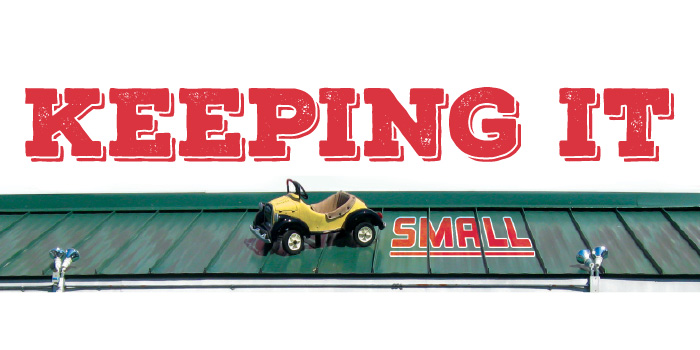 In an industry where the big keep getting bigger, Doug Hopple is staying small…and loving it.

Doug Hopple’s goal was to be in white-collar work, which is why he went to the University of Baltimore. He wanted to become a systems operator, working with management information systems. But that just didn’t make him happy.

While attending college full-time, Hopple worked part-time at Rathell Motors Collision Repair in Parkville, Md., and did bodywork in his parents’ garage. 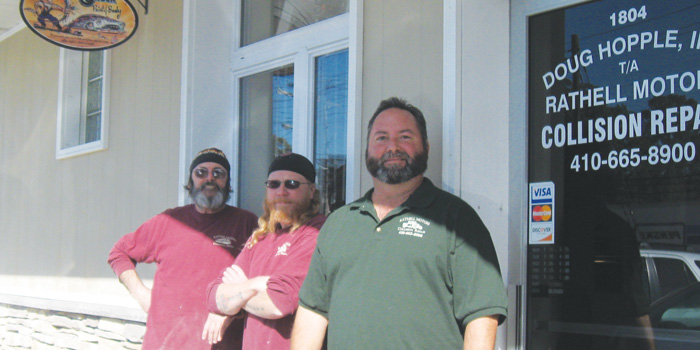 “So I got my degree, went out into the white-collar field with a suit and tie, and actually took a cut-and-pay job, believe it or not, from the body shop to a degreed position,” says Hopple. “I was fine with that, figuring I could climb the corporate ladder. Well, within three years, I just wasn’t happy.

“They would give me a raise, and it was almost what I made on a weekend in my parents’ garage. And I thought, ‘Gosh, how many years is it going to take me to make any money if they’re going to give me this kind of raise?’ It just wasn’t working out for me.”

Hopple explains that his mom once got him a hat that read, “I’d rather be in my garage.” He says that couldn’t be a truer sentiment. He’s just that kind of guy, a guy who comes home from work and starts tinkering on old cars and Harleys.

In 2016, Hopple will have owned Rathell Motors for nearly 20 years.

Rathell Motors isn’t a very large shop. But it’s not trying to be.

“People like a small shop because they’re talking to the guy who’s doing the work,” says Hopple. “I think that’s the whole ‘shmeal’ right there. A lot of people don’t want to give their money to big companies. They want to keep it in the neighborhood. I’ve noticed that more and more as the years go by: People want to keep the money local.

“People go into these dealerships and these big conglomerates that have the leather sofas and big beautiful waiting rooms, but that scares a lot of people away, especially if it’s self-pay.”

Keeping his shop small, with only three employees, means that Hopple stays plenty busy. But he’s OK with that.

“I can never complain about being busy. If everybody is slow, I’m OK with that, but if I’m the only one that’s slow, then I feel like I’m doing something wrong. 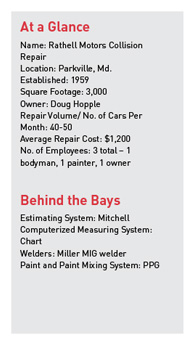 “Sometimes I get home from work and my wife is like, ‘What’s up?’ and I say, ‘I just have so much running though my head.’ Which I’m fine with, because it keeps you sharp. I always say it’s a good problem to have.”

Hopple explains that if someone’s not beating hammers in his shop, he’s not making any money.

“That’s why I’m such a workaholic. I like to be here, I like to be hands-on, I want things to go smoothly,” he says. “I oversee everything, and I’ve made a pretty damn good living out of it.”

Hopple believes his success comes from his way with people. He’s personal and he’s willing to work with the customer.

At Rathell Motors, “you’re dealing with the person who owns the business. I’m doing the estimating, I sweep the floors, I clean the toilets, I can paint, I can do body work and I know what I’m talking about. I know what I can save and what I can’t save right off the bat. You’re talking to the guy who has all the answers.”

Hopple doesn’t really have an issue with time constraints from insurers. He says the key is communication.

“I’m pretty on the ball here. I get a car in here that’s going to take three to four days, and it’s usually done in three to four days. It’s all about communication. I don’t have any problem with insurance companies and time constraints. I guess the fact that they know I’m not out to get them is the reason they work with me too.

Hopple states proudly that he’s a true American who believes in capitalism. If somebody came to him and offered to buy him out for a top-dollar amount, he might consider it. But is consolidation good for the industry as a whole? Well, that’s a more complex question with an even more complex answer.

“I don’t know if it’s good or if it’s bad,” said Hopple. “I don’t like to see a lot of small shops being taken over. What I really don’t like is the fact that they’re probably going to be steered against a lot by the insurance companies. By the same token, I do a lot of insurance work here, and there’s a lot of adjusters who say, ‘Take it where you want to, but Rathell Motors is over there. I know Doug, and he won’t supplement you to death. If it’s a total loss and it’s right on the border, he’ll make it work for you.’”

Hopple isn’t shy in revealing his true feelings when it comes to aluminum. Plain and simple: He doesn’t think the industry is ready for it, and neither is he.

“I’m not ready to spend $80,000 to get my shop ready. I probably won’t do it,” he said. “I’m not sure how [aluminum] is going to go, to tell you the truth. It’s just like plastic panels with the Saturn – everybody thought everything was going to become plastic. Well, now that’s out.

“I just don’t see it going to aluminum. I think Ford is out there on a limb. Might be a good idea. I know there are other cars out there that have some aluminum panels. Do I see every car becoming aluminum? No.”

Hopple says he’s lucky when it comes to fixing in-car electronics because, when he can’t diagnose and fix something himself, he has mechanical shops around him that can.

“I can figure a lot out, but I’m not a mechanic. I don’t want to be a mechanic!” he says. “But I’m very fortunate to have two or three mechanical shops in my area that I can send [vehicles] to.”

Hopple still handwrites all of his estimates as well. As a small business, he likes it that way.

“I give a ballpark [figure] and give them a card. I can tell if they’re out shopping or they’re really interested in getting this thing done,” he said. “I’m not the guy that’s going to sit down for 20 minutes with every single person that comes in my front door and get every little piece of information from them and run it through the computer. That’s just not what I’m going to do.

“I have a pretty good idea of who’s coming back and who’s not coming back. And I don’t think people really mind that; I think they like the down-to-earth talk.”

Being a small shop entails a different sort of marketing strategy – one that doesn’t always use your average advertising playbook.

The only “advertising” Hopple does is through local churches and high schools. He’ll team up with the Cub Scouts and sponsor golf outings as well.

“I’m not the guy that does advertising in phone books and stuff like that. That’s very expensive,” he said. “It’s a lot of word-of-mouth. I’m sticking to the small-guy stuff, and it still works today, it really does.”

Advertisement
In this article:Shop Profile