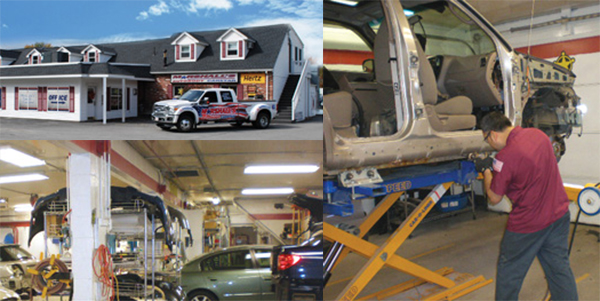 Former Air Force member Jim Marshall makes it his mission to give back to wounded veterans.

Life couldn’t get much more exciting for Jim Marshall in 1980. As an aircraft mechanic for the Air Force, he worked on and traveled with an F-5 fighter plane left over from Vietnam.

“They were painted to match Soviet-style planes,” Marshall explains. “We flew missions across NATO to simulate Russian pilots and learn their maneuvers so that our other pilots could train off of that.”

Coming Home
There is a beginning and an end to everything, though, so in pursuit of another challenge, Marshall finished his duty with the Air Force and came home to help his father with the family business – a collision center that had grown from four bays to 12 from 1980 to 1983. Within a couple more years, he helped his father expand to 16 bays and continued to work alongside him for 12 years, beginning at the ground level and absorbing every bit of information he could about the auto body business.

“All the things I learned prior to the service, I had to relearn the father-son way,” says Marshall. “I immediately became involved with the vocational school I graduated from and went to all the training classes I could to learn computer technology, which was fairly new at the time.”

Becoming a CARSTAR
Marshall eventually bought the business from his father in 1992, and grew it from $820,000 in gross sales to $2.85 million today. A used car business on-site helps bolster revenues, with about 150 sales a year.

Four years ago, he became a CARSTAR location.

“CARSTAR has been a vehicle in which to work on my business, as opposed to end my business,” Marshall says. “It’s opened my mind up to reading more books about business management, not just trade publications.”

Employee Retention
Marshall serves as the general manager of his shop, while his wife is the accountant. A testament to the way he treats his employees is the many long-timers he has: his production manager has served 17 years, four technicians have worked for him more than eight years, and three other techs have five years of duty. A couple fresh vo-tech grads have recently joined his team.

Although Marshall covets his employees, he also considers the task of keeping them happy and current with today’s technologies one of his biggest challenges.

“It’s expensive to keep techs trained to an I-CAR level when some states or insurance companies don’t require it,” he says. “It’s also very motivating for an independently owned shop to try to come up with the money to do this training. The training is very beneficial from the safety aspect, as well as prohibiting any type of damages that could be incurred by lack of experience and knowing how to do the repair.”

Marshall feels that shop owners who try to keep their employees purely through money are missing a big part of why they stay loyal to them.

“Money is a byproduct of their hard work, skills and efforts, but it’s not their only driving force,” he says. “They want to know that they have a stake in the game. They want to be appreciated and trained. And they want to be part of something bigger than themselves.”

Culture Club
Marshall prides himself on the culture he has built at his shop. He tells the story of how his son came home from college one time with a T-shirt that read, “Team,” with an “I” laying on the ground underneath it, all beat up. Marshall was so moved by the shirt’s message that he scanned it and put it on plaques throughout his shop.

“There truly is no ‘I’ in team in our facility; everyone is equal in value,” says Marshall. “They may have a different level of training or education, but everyone can be mentored by the old guys, knowing that everyone plays a part of that team.”

KPI Measurement
Marshall knows how important it is to measure his shop’s performance on every single job, every day. He feels his Mitchell management system, the training he has received from CARSTAR and his participation in a financial focus group has shown him how to effectively collect data from each repair order and measure and manage KPIs.

Customer Mix
About 15 percent of Marshall’s business is customer pay, 10 percent fleet and the rest insurance.

“I don’t try to market either the customer pay or the insurance pay; we blanket market to the entire community,” he says. “I’m trying to reach out and grow my business because I’ve never previously explored it before and I have a specific spraybooth that I can put box trucks in. That booth has given me the opportunity to search out fleet work and capitalize on that.”

While some shops in the industry have been trying to litigate against insurers through “Assignment of Proceeds” and other legal methods to recover fair and reasonable charges, Marshall has no such experience with that. Plus, it runs contrary to his business philosophy.

“I feel that everything in our industry and our business is a negotiation, and with a negotiation, there has to be a little bit of give and take on all sides,” he says. “By focusing on the customer as the No. 1 concern, even if it means it’s a learning lesson for me at that time, it’s more valuable for me to learn a lesson than a fight that I don’t want to fight.”

Marketing
Marketing has traditionally been a challenge to shops, both from an affordability standpoint and finding the right avenues. Marshall prefers a grassroots approach.

“From going to local schools and participating in a program that we started to belonging to the local Chamber of Commerce, we do it all,” he says. “We’re involved in our community tremendously. We support one of every sports team; if there’s a sport, we put our name on the back of the shirt. We also do hockey boards at ice rinks and holiday lighting festivals. Being involved in your own local
community will mushroom your sales tremendously.”

Customer Service
Marshall subscribes to CARSTAR’s tagline, “Relax, we’ll take it from here.” He tries to remind his employees of that when he walks into his office and hears them say, “I can’t believe the phone won’t stop ringing.”

“I respond, ‘You’re welcome,’” he says. “That’s great news that the phone won’t stop ringing because it means we’re doing our job; we’re following up and listening to what the customer has to say after they have an accident. They’re in a distressed situation, so the biggest thing we can give them initially is empathy, the second thing being to help them understand how the process is going to take place. They don’t want to be in the situation they’re in, so we have to try and ease any stresses they may have.”

Compensation
It seems that most shops compensate their employees on a flat-rate basis, but some are hourly and others are even salary. For the first time in 40 years, Marshall is mandating that his employees choose their preferred method.

“We create a benchmark on an hourly scale for a certain amount of time – for three or four months if they’re a new hire. We analyze their numbers for a specific time frame and then we look at our options and figure out what would be more valuable to them. So right now we have hourly with bonuses and also flat rate, and I do whatever works best for both the company and the technician.”

Charitable Activities
Marshall is involved in many charitable activities throughout his community and the collision repair industry. After his father passed away, he started a $2,500 scholarship in his father’s name for the best student at the vocational school he attended. He is also on the school’s advisory committee for co-op programs.

“I help place students in other body shops in the area; there’s somewhere between three to six students who get placed,” Marshall says. “The ones who don’t get placed I often take myself to fill that void and keep the program running.”

He also contributes to Donate to Educate, where he donates to any PTO or PTA once a customer brings a car to him for repairs.

iPods for Wounded Veterans
Marshall’s most recent charitable endeavor has been to join forces with an organization called “iPods for Wounded Veterans.” It was started by three Vietnam veterans who called Walter Reed Hospital a year and a half ago and asked if the troops needed anything. The doctors and nurses said the iPod shuffle would be ideal because it clips onto anything and it would be one of the most convenient things to have. So they immediately began collecting funds and delivering hand-carried iPods, Nooks and Kindles.

“I’ve been involved with iPods for about a year now, and we’ve raised over $18,000 at my facility,” says Marshall. “I worked with CARSTAR’s marketing team to promote it to CARSTAR as part of their national campaign for the month of November. That means 250 stores in the U.S. will have the opportunity to collect iPods or any kind of media devices and bring them down to select military hospitals around the country.”

Advertisement
In this article:Shop Profile, Veterans