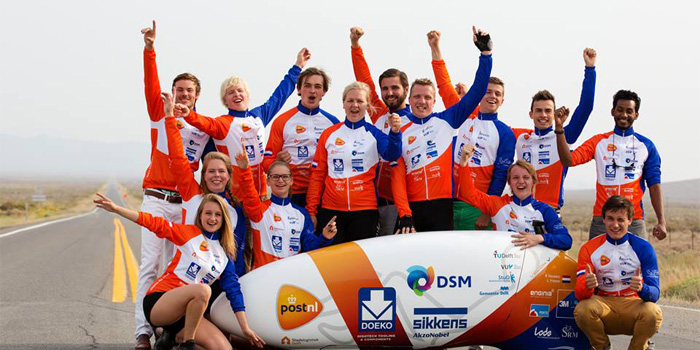 Sikkens coating helped Delft and Amsterdam Human Power Team (HPT Delft) reach a speed of 83.13 mph in 2013, the fastest speed ever achieved by a human using their own power.

AkzoNobel announced that its high-performance Sikkens coating is helping one of the fastest bicycle teams on earth regain its world record. The Delft and Amsterdam Human Power Team (HPT Delft) reached a speed of 83.13 mph in 2013, effectively achieving the fastest speed ever achieved by a human using their own power, a record that has only just been beaten by 3.48 mph by the AeroVelo Team in the Nevada Desert.

The bicycles used for Human Powered Speed Challenges bear little resemblance to those favored by most cyclists across the globe. Fully enclosed by a super-lightweight shell, there are no windscreens for the rider to see through, only displays which take a feed from two overhead cameras. The advantage of this configuration is improved aerodynamics.

In the elite world of performance and speed, every single element of design and production must minimize drag. This is a critical consideration in the cutting-edge technology and specialist knowledge developed by Sikkens in partnership with the McLaren F1 racing team.

The high-performance coating prevents the air from “sticking” to the bicycle. As Frank Vergeer, R&D director of vehicle refinishes, explains, “Compared with an ordinary bicycle, the design of the VeloX has only a tenth of the resistance. The paint is so smooth that the bike has about as much resistance as a DVD held vertically in an airstream.”

Remco Maassen van den Brink, AkzoNobel’s Vehicle Refinish marketing director, adds, “The World Human Powered Speed Challenge is run only once a year, but already Team HPT Delft is planning how to regain its world record in 2016. The teams at both Delft and Amsterdam Universities are awash with flair, and we believe they are in line for further great success. They missed out by a small margin this year, but I know next year they’ll be back. They have set their sights on breaking the record again. It’s a real privilege to work with such talent and support human advances.”