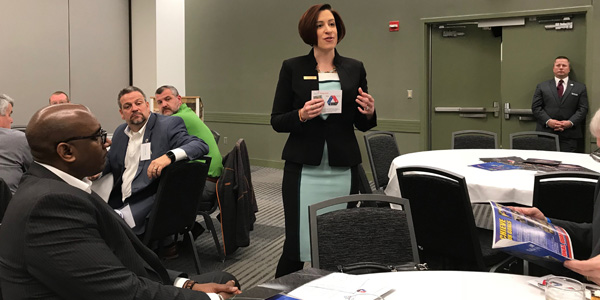 SkillsUSA is a national membership association that serves students who are preparing for careers in various skilled trades and technical and service fields, including collision repair and refinishing.

Before he got involved with SkillsUSA, Keaton Pfeiffer “was probably one of the most shy, insecure people you would’ve met,” by his own account.

Speaking to a roomful of business leaders, educators and trade journalists April 24 at the Greater Columbus Convention Center in Columbus, Ohio, Pfeiffer appeared anything but shy as he reflected on his experience with SkillsUSA, which included serving as a national officer for the 2016-2017 school year. Pfeiffer, who now attends Ohio State University, got involved with a SkillsUSA chapter when he was a pre-engineering student at the Upper Valley Career Center in Piqua, Ohio.

“I don’t think I’d be at Ohio State if it wasn’t for being at SkillsUSA,” Pfeiffer said. “I don’t think I would’ve had the confidence to apply to as many colleges as I did. I wouldn’t have had the confidence to apply myself and get involved as much as I am at Ohio State. This past semester, I was a founding father of a chapter of a Christian fraternity. Being able to do that all results from what I’ve learned at SkillsUSA, and that’s why we’re so thankful for you and our advisors helping us get to where we are.”

SkillsUSA is a national membership association that serves students who are preparing for careers in various skilled trades and technical and service fields, including collision repair and refinishing. The organization’s mission is to empower its members “to become world-class workers, leaders and responsible American citizens,” through the development of personal, workplace and technical skills. (To learn more about the SkillsUSA Framework, visit the SkillsUSA website.) 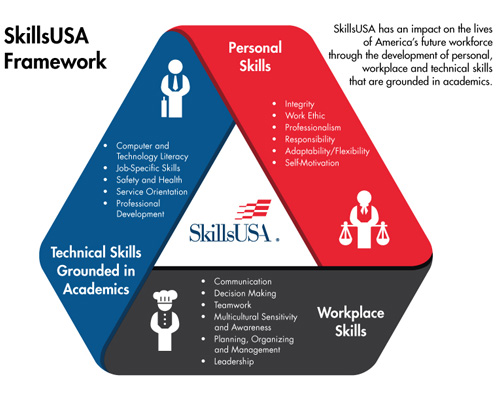 Jackie Walker, assistant director for SkillsUSA Ohio and “a true believer that it changes lives,” told the group that “this is the most exciting time I’ve ever seen in SkillsUSA’s history.”

With more than 30,000 members, SkillsUSA Ohio is the second-largest state in the national SkillsUSA organization, based on 2017-2018 membership. Walker, though, suggested that Ohio has become the largest state this year, supplanting Massachusetts.

For this year’s SkillsUSA Ohio State Championships – held April 24-25 at the Greater Columbus Convention Center – Walker said the organization expected more than 5,000 students, parents, advisors, judges and exhibitors to be in attendance, making it the largest event in SkillsUSA Ohio’s history. 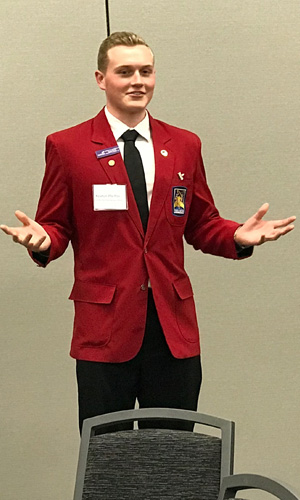 Keaton Pfeiffer, a former SkillsUSA national officer, credits SkillsUSA for helping him come out of his shell.

Against the backdrop of several thousand students plying their trades for a chance to advance to the national SkillsUSA Championships, Walker asked attendees to consider the costs of organizing the event. Noting that the facility alone cost $75,000 to rent, Walker said she’s trying to create “a culture of giving that’s never existed in the state of Ohio.”

“In the 2017-2018 fiscal year, [SkillsUSA Ohio] took in zero dollars and zero cents in monetary donations to support an organization of almost 32,000 students, to support an event that cost us just short of $400,000 in out-of-pocket costs,” she explained. “ … This conference cost the organization $360,000, and we are anticipating an income of $220,000 in registration. That is not fair to those students to pass that cost onto them, and I won’t do it.”

Walker, who has been involved with SkillsUSA since 2001 – as a volunteer up until six years ago – challenged business leaders to think about ways they can support the organization. SkillsUSA Ohio has a number of sponsorship opportunities, for example, that include monetary donations and in-kind donations of equipment, material and personnel. But she emphasized that the organization is trying to build long-term partnerships, not just find new sources of funding.

“Our teachers look at these contests and say, ‘That’s what I need to do to prepare my students,’” he explained.

Gearhart called the SkillsUSA technical committees “probably the most direct pipeline from business to education reform that you’ll find anywhere in American education.”