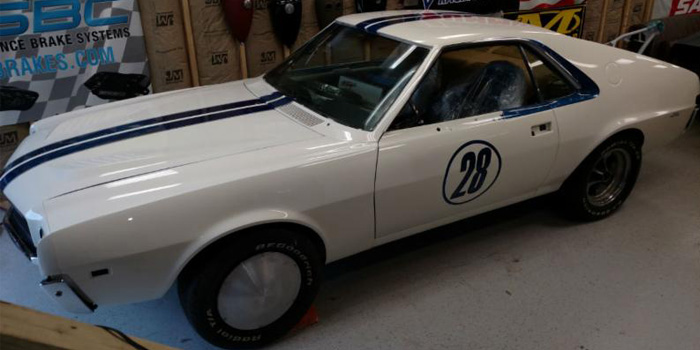 Project was an all-female build of a 1969 AMC AMX racecar that Spanesi assisted in, showcasing the wide range of talented women in the automotive industry.

The Valkyrie Project was an all-female build of a 1969 AMC AMX racecar, showcasing the wide range of talented women in the automotive industry. This project serves to inspire women to explore their interests in the fields of automotive and motorsports. The 1969 AMC AMX project vehicle serves as a platform for women in the industry to design, fabricate, and ultimately build a uniquely powerful and equally beautiful car.

The Valkyrie Project began as an idea during a discussion with key industry leaders at the 2014 SEMA Show. Initially, the discussion was simply about a build, but this spark was the onset to an idea that began to grow.

During the SEMA Show, many of the participants of the Valkyrie Project will be in the Spanesi booth to answer questions about the project. Key participants including JoAnn Bortles and Karen Salvaggio will be on hand at times throughout the show.

Spanesi Americas assisted the group in the body and paint phase headed up by Bortles, an award-winning custom automotive painter, airbrush artist, certified welder/fabricator, author and photojournalist with more than 30 years of experience in the automotive industry. She has appeared on The Today Show, NBC News, Musclecar TV and recently TruTv’s Motor City Masters.

To read more on this year’s SEMA Show in Las Vegas, click here.