A State Farm agent has been awarded $10,000 for making a hole-in-one during a recent CARSTAR charity golf tournament. 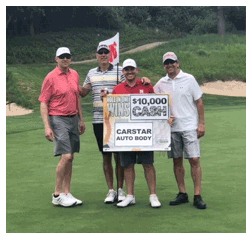 A State Farm agent has been awarded $10,000 for making a hole-in-one during a recent CARSTAR charity golf tournament. The agent, Aaron Stockton, attended the May event hosted by Omaha/Lincoln CARSTAR. Golfers were primarily local insurance agents and claims personnel.

Stockton won the money after he aced the 165-yard hole with an 8 iron at the Quarry Oaks Golf Club in Ashland, Nebraska.  This was Stockton’s first hole-in-one winning a large prize but his third total.  Stockton’s foursome was composed of State Farm agents Kirk Goodnight, Corey Juma and Tom Demory. A representative of Make-A-Wish Nebraska witnessed the shot and served as the official target hole witness.

The CARSTAR golf tournament is a scramble format and has been an annual event for 16 years.  The event raises money for the Nebraska Chapter of Make-A-Wish.

“I have played in the CARSTAR annual golf tournament for a few years now and it is always a great event.  Obviously, no one expects to hit a hole-in-one in tournaments like this, but I was lucky enough to have that happen!” said winner Stockton.  “Hopefully the news of this happening will bring more awareness to the tournament which means more money raised for Make-A-Wish Nebraska.”

“For 16 years we have bought hole-in-one insurance policies but never have had a winner. I thought it would be a miracle if it ever happened!  Evidently, this was the day for a miracle for Aaron,” said Keith.

The $10,000 cash prize was received by Stockton from an insurance policy CARSTAR purchased from Hole-in-One International in Reno, Nevada. The odds of an amateur making a hole-in one: 12,500 to 1.

Advertisement
In this article:carstar, charity