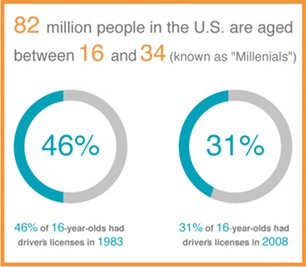 For many Millenials – commonly known as Generation Y – owning a car is becoming less of a priority, according to a recent article published on AOL Autos.

While many believe that the younger generation’s 82 million members are simply "anti-driving," the reality is that to them, cars are less of a necessity and more of a luxury. The article cites the Great Recession as a culprit – more young people are postponing adulthood and moving back home to work menial jobs instead of landing careers right out of college.

Teens also display a lack of desire to drive. A study conducted by the University of Michigan’s Transportation Research Institute shows that the percentage of 16-year-olds with a driver’s license has dropped from 46 percent in 1983 to 31 percent in 2008.

"Now the cell phone is the gateway purchase into adulthood," said Sheryl Connelly, a futurist for Ford.

But for Gen Ys who are looking to get behind the wheel, they’re primarily concerned with three vehicle characteristics: compact size, sporty style and compatibility with technology. For example, both the Toyota Corolla and Ford Focus have recently received stylish makeovers and now include smartphone integration.

"[Millenials] have a very sophisticated eye, but they also want to know, ‘What else is the car going to do for me?’" said Connelly. "They’re really into the multifunction device; they don’t wear watches because they think of a single-function device as kind of a waste. So the car has to be more than just transportation: ‘What else is it doing for me other than getting me from point A to point B?’"