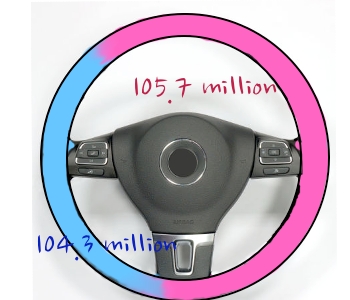 A recent study published in the journal of Traffic Injury Prevention shows that more women are in the driver’s seat than ever before — and they even have the upper hand over men.

According to the University of Michigan’s Transportation Research Institute, more than 105.7 million women were licensed to drive in the United States in 2010, compared to only 104.3 million men.

The study’s data indicates that this shift has been a gradual one over the past 15 years, and it’s expected to continue in the future. It also shows that young people of both sexes are less likely to have a driver’s license compared to 20 years ago – a factor that could implicate vehicle demand, energy consumption and road safety.

"Females are more likely than males to purchase smaller, safer and more fuel-efficient vehicles," said Sivak. "They drive less and tend to have a lower fatality rate per distance driven."