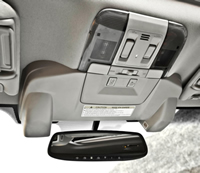 Subaru of America has announced the debut of its EyeSight driver assistance system, which it says will be one of the most affordable of such technologies available in the U.S. market. It will be an option on 2013 Legacy and Outback models and will subsequently appear on other products in its lineup.

EyeSight integrates adaptive cruise control, pre-collision braking and vehicle lane departure warning. The new technology, which can also detect obstacles in front of a parked car and limit potential damage in an impact, will become available later this year.

EyeSight uses two charge-coupled device (CCD) cameras developed by Subaru and is mounted inside the car on the upper edge of the windshield, thus reducing the potential for damage that could occur in bumper-mounted systems, such as radar, according to Subaru. The EyeSight system processes stereo images to identify the vehicles traveling in front, as well as obstacles, traffic lanes and other items. The video information is relayed to the EyeSight computer, which is also networked with the car’s braking system and electronic throttle control. Below speeds of approximately 19 mph, EyeSight is capable of detecting pedestrians in the vehicle’s path and can activate to mitigate or even avoid the collision, according to Subaru. Under certain circumstances, Eyesight is able to bring the car to a complete stop, thus avoiding a collision.

At relative speeds above approximately 19 mph, EyeSight can apply the brakes when an object is detected and will attempt to brake if the driver takes no evasive action or does not brake appropriately, mitigating potential damage from a collision. The system can recognize programmed objects such as vehicles, motorcyclists, bicyclists and pedestrians.

EyeSight’s other features include adaptive cruise control, which can maintain a safe distance between vehicles at highway speeds, and technology that helps prevent rear-ending and parking mishaps by sensing obstacles around the vehicle.