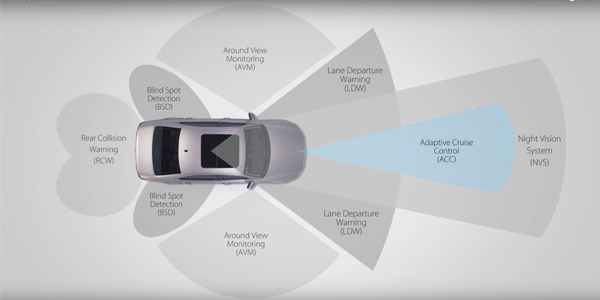 A new State Farm survey shows that Americans who drive vehicles equipped with ADAS admit to using their smart phones while driving at significantly higher rates than those without the latest tech.

State Farm has released the results of a new survey showing that Americans who drive vehicles equipped with adaptive cruise control (ACC) or lane keeping assist (LKA), both advanced driver-assistance system (ADAS) features, admit to using their smart phones while driving at significantly higher rates than those without the latest technology.

While these ADAS features have promising safety benefits, State Farm states, they are designed to work in conjunction with engaged driving behaviors.

Forty-two percent of drivers with lane keeping assist technology stated they “frequently” or “sometimes” use video chat while driving compared to 20 percent who engaged in the risky behavior without the advanced technology.

The highest level of automation available on the consumer market today is Level Two. At this level, the vehicle can control steering, braking and accelerating in certain scenarios. Only a subset of new vehicles sold to the general public today are equipped with Level Two features. However, the human driver must pay attention at all times and still perform the remainder of the driving.

Half of all respondents also said they would be willing to take their eyes off the road for less than five seconds to focus on another task – all while driving on an open highway at 65 mph. According to State Farm, at that speed, you can drive the length of a football field in 3.2 seconds.

CIECA to Hold Webinar on Cybersecurity
Connect with us