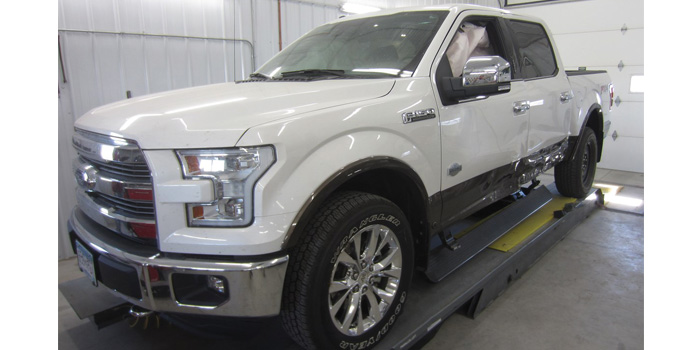 An open mind and the right attitude was all Carlson’s Collision & Glass needed to repair a damaged 2015 Ford F-150.

Change is the one thing you can be assured of will always happen. We may not like it, but sometimes we might. Many times, it’s our approach to change that makes the difference.

I myself am reluctant to change. The unknown scares me a little. To be honest, it scares me a lot. But life moves on, with or without you. I’ve met so many people in the last 10 years of my life that have made me wish, frankly, that I had never met them. Why? Because the negative process in their minds was too much for me to bear. Some are in the middle and just need some support to boost their confidence. Others surprise the hell out of me. Their get-it-done attitude is inspiring.

Glass Half Full or Half Empty?

I’ve written many stories on aluminum repair where I said, “Aluminum isn’t difficult, just different.” That means it’s a time-consuming repair but not difficult to learn.

I’ve heard many people grumble about aluminum repair time, training and equipment. But I’ve found just as many repairers who are happy about the changes. It all depends on whether you see the glass as half full or half empty.

One of the damaged 2015 Ford F-150s that came to Carlson’s Collision & Glass. Time to learn and earn!

A few years ago, I met an owner of a shop in the middle of Corn Country, Minn. By “Corn Country,” I mean that a corn crop grows literally 100 feet from the front door of his shop. I also mean that his shop isn’t near any large population base by 75 square miles. It’s just a small-town shop.

Craig Carlson was setting up I-CAR classes for his technicians when I met him. I have to admit, he’s a guy you can respect and like right away because he’s a glass-half-full person. He likes his shop to be on the edge and ahead of the game.

As well as being fairly organized, Carlson has the ability to see the big picture. His shop started in 1996 as a two-man operation, and today it has grown to 12 bays and six technicians with 24-hour towing and in-house glass repair and replacement. He sees tools such as ALLDATA as priceless, especially in rural areas. He also sees aluminum as here to stay, so it’s time to learn and earn.

I thought I would share with you his adventure into aluminum. He was honest on his approach and comments. And trust me, it was not without complications and stress. 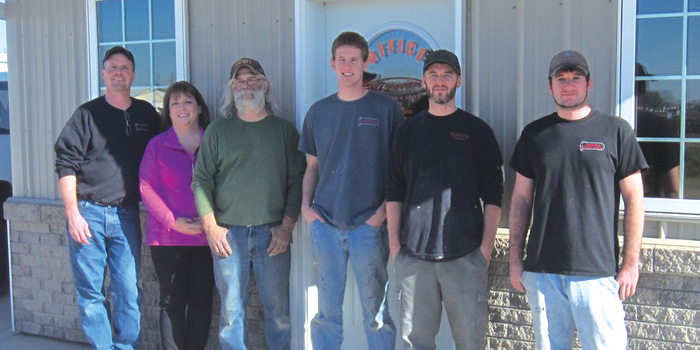 First, living in farm country where everyone owns a pickup, you have to imagine that Ford’s leap into the aluminum F-150 made Carlson nervous and curious. He also saw the expense as large and stressful. Would it pay off? Can my techs do it? How long will it take? I’m going to give you his thoughts as to the issues and how he dealt with them.

“As you know, we’re part of the Ford National Body Shop Program, having been approved on Feb. 1, 2015, after we got the last of our equipment,” Carlson said. “We’ve been part of Assured Performance since the beginning of the program. So far, we have done two large 2015 F-150 jobs, the first being a deer hit which involved basic sheet metal work along with repair to the uniside and replacement of both curtain bags and seat bags. The second one, which we’re still on, involved a King Ranch and replacing all four doors, one boxside and the left uniside section, and of course both curtain bags and seat bags. Both of those jobs were referred to us because we’re part of the Ford program. I’ve always been a huge fan of the program, and I think it’s finally starting to put  food on our tables. Certification, training and proper equipment have been almost nonexistent in a lot of rural locations, but I’m here to tell you that it can be done. However, it doesn’t happen overnight. We’ve been a proud  I-CAR Gold Class shop since 2007, and some of those classes we’ve attended have been over 100 miles away. This business is what you make of it. As you know, we’ve hosted many classes right here, including the  FOR06 class.”

This comment from Carlson made me examine a trend. I’ve heard so many “metro shops” complaining about the return on investment, wondering if the program is worth it. I have to admit that many rural shops don’t take or receive as much training on new vehicles as their metro counterparts. Training is a huge commitment as it’s usually miles away. Weather in Minnesota, and especially winter, makes it tough to send techs 100 miles one way to class. Carlson has taken the approach of bringing classes to him and encouraging all shops in his area to attend. Not only does this help him get his technicians trained, it boosts his shop’s morale to take training and learn. He has fostered a big portion of the education in his shop.

The issues with the F-150 King Ranch aren’t common but worth a read as things don’t always go as planned.

The pickup was involved in a rollover, which surprisingly caused only minor damage. It got hit on the driver side hard enough to roll it onto the passenger side. Technically, it never went all the way over. Also, there was absolutely no structural damage to the truck whatsoever; it was all cosmetic.

“The truck is built like a tank,” said Carlson. “From the moment we got a signed authorization on repairing this truck, we instantly started studying up. We downloaded the textbook from the FOR06 class and went through all of the procedures and said, ‘Let’s do this.’ The owner and I have had a couple lengthy discussions involving the repairs. He had a lot of questions, and I felt very comfortable in giving  him educated answers, but I did tell him this: ‘Part of me  is very excited to pursue this challenge, and part of me wants to throw up.’ He got a good chuckle out of that. I assured him that Ford had laid out a very detailed repair plan, and we were going to follow it. After getting a signed repair authorization, we began repairs.

“After disassembling, the first thing we did was push out the rivets. After getting about half of them out, the tip on the tool broke…done for the day. We contacted the manufacturer directly and they overnighted one out to us for no charge since it was brand-new. They have changed the design on it and the dies need to be replaced in a set, and the rest went just fine. After fitting our part up on the truck, we started to install the new SPRs. After the first two rivets, the tool started acting funny in that it would not stop after the trigger was released. Talk about a possible accident waiting to happen to a technician’s finger or hand! Then, the tool stopped working altogether. So there we sat on Friday with the part glued, fit and clamped. We then contacted the I-CAR technical center to ask what to do, and they recommended that we remove the part and scrape off all the glue, and we did. We then contacted our distributor, who was there by 10 a.m. Monday with a brand-new tool, exchanging it at no cost. So off we went again, and we got it all put on without a hitch. Then, we started installing the blind rivets on the back of the cab when we discovered that the riveter didn’t contain the correct dies to accept the rivets provided by Ford, so we finished with an air riveter we had at the shop. I contacted Grade A Tools out of Rock Port, Texas, who sold us the Ford-approved toolbox, and they decide to send us the tip at no charge since we were a repeat customer. They told us they sold us exactly what Ford recommended for tools and there must have been a change somewhere along the way that he had not been aware of; we were the second customer to contact him about the problem.

“One challenge I see here is how many different rivets are required to fix this truck. It would be very difficult to repair this truck without the book. Another challenge is the sectioning and welding of the outer panels in that it’s not quite the same as welding on the I-CAR coupons.  The other major challenge we’ve faced on both of these repairs has been part availability, especially restraint parts. This has definitely extended the length of repair on both of these jobs.”

Lead body technician Aaron Zieske had his own thoughts on the repairs.

“Ford has definitely made this truck more repair-friendly than the previous model. The fasteners are a much more consistent size than the previous model, so not having to constantly change socket sizes has made it easier to make better time. Ford has published an excellent repair manual to assist with repairs, eliminating a lot of those unanswered questions. The procedures are very clear.

Said glass installer Larry Ackerson, “We’ve installed a couple windshields in these trucks, and have been using the Glass Bot with string to avoid nicking the painted surfaces. The only tricky spot for removing the glass is the roof where the glass drops down from it, but the Glass Bot has proved to be very successful in accomplishing that task.”

To sum things up, Carlson said, “I see a very bright future in the collision business if you’re paying attention to what’s going on around us. Certification is definitely going to be a large component and will play a key role in the success of our business and employees. My guys have kept an open mind, which has made the transition to aluminum much easier. It’s not necessarily  harder, just different…very different.”

When change occurs, nothing is as smooth as it should be. Changes in repairs and procedures are normal, as is any change in any shop. “Stuff happens,” as they say.

I’ve decided to tweak my oft-used phrase to what Carlson said: “Aluminum repair isn’t necessarily harder, just different…very different.” These words should carry more weight as they’re from a shop owner making change work, not an industry trainer like myself.