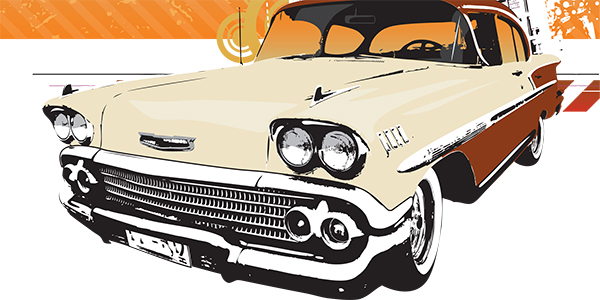 I’ve been a car guy forever. I drew cartoon Bucket T’s with flat-head V-8s, velocity stacks, headers and flames on my grade school notebooks. I pestered everyone in my family to let me steer the car from the driver’s lap or the middle seat almost as soon as I could talk. I practiced my clutching and speed shifting skills on lots of my dad’s non-synchro pickup trucks and my drifting skills in my mother’s floaty Ford sedans in junior high.

My first car was a Hemi. “Wow,” you just said, “that’s a nice first ride!” NOT. It was a hard-used 1958 Chrysler four-door hardtop (no B pillars) with the base V-8 two-barrel and a push-button automatic, but it had hemispherical heads. And it cost just $235 plus tax in 1964, leaving me money for a new glasspack muffler.

I descended from there into a string of British sports cars where “weather-tight” was more of an idea than an actual feature. Likewise, “reliable” was not a word often used to describe anything from the English auto industry. But on a sunny (and dry) day, the snarl and bark from those inline fours and sixes made for lots of fun. From original 10-inch wheel Minis (2) to Triumphs (2) to Lotuses (2) to Jensen Healeys (1) to MGs (1) and, most expensively by far, Jaguars (1), I’ve paid my dues in the British car owners’ club and spare-cash vacuum cleaner.

I bought the beautiful 1976 12-cylinder Jaguar XJ-12 sedan (it did have B pillars) from a surgeon friend who said he couldn’t afford the car. There’s a life lesson I didn’t listen to then: if your basic surgeon can’t afford the car, neither can you! But I knew it was just because he wasn’t a car guy, and I was, so I’d just handle the regular British gremlins I was accustomed to chasing. Ha!

Just for perspective, Jaguar had to put an electric fan on the 12-volt battery under the hood because there was NO air space between the firewall and the radiator support. You could not see the ground with the hood open. And it turned out all the trapped heat from those 12 cylinders (the distributor cap looked like a giant black plastic pen holder) fried the battery regularly.

Stories of that Jag are legendary around my house. For example, the time the two saddle gas tanks (one chrome gas cap in each quarter panel) started spewing gasoline out of both necks at a stop sign. Or the electric windows that wouldn’t move, either up or down, once the outside temperature got below 34 degrees – extra fun at the drive-thru lanes. The time the speedometer cable made an unending, high-pitched screaming noise that wouldn’t quit no matter how fast or slow the car went, 100 miles from home. I finally gave up all hope one expensive fall but knew I couldn’t sell the car in the winter in Iowa, so I parked it inside my parents’ condominium underground garage while they were gone. One day in late January, the building super called wondering if that was my Jaguar leaking fluids all over the surrounding four stalls. It was.

The most exotic car I’ve ever owned was a 1973 Citroen Super Maserati featuring an all-aluminum body with polished stainless steel trim (no chrome). I believe it is generally held to be the most mechanically sophisticated and complicated auto ever built. We do miraculous things with computers in cars these days, but back in the 1970s it was all engineering and machining, not just writing more computer code for electric actuators.

The car was all hydraulic everything – the suspension, the steering and especially the brakes. The car was famous for its “brake pedal,” just a round rubber bladder sticking up from the floor. When you pushed on it, you were directly compressing the special (expensive) green French hydraulic fluid and stopping the four disc brakes right now. You had to learn to just squeeze your toes by millimeters as the slightest push applied the calipers.

The 1973 Citroen Super Maserati was Motor Trend’s Car of the Year for 1972, a true four-place GT car with room for four adults and their luggage in leather seats that an entire herd of cows contributed to. It had four ride heights and carried no jack, just a steel rod. Raise the car hydraulically from the driver’s seat, place the rod near the flat tire and lower the car; it jacks itself off the ground. The steering wheel had a single spoke on the bottom; the steering ratio was quicker than any go-kart you’ve ever driven. Any new driver was startled by how fast the wheels turned and wove back and forth down the road for a block or two before they figured it out. In typical French fashion, the suspension travel was enormous, and even huge potholes were smoothed out.

The car had previously suffered an engine fire in downtown Chicago in the late 70s and, unable to find the hood release, the fire crew cut open the giant aluminum hood with an ax to extinguish the flames. In 1980, one of my customers and mentors bought the car as a total. How hard could it be, he thought. Despite the fact that the fire had burned all the hydraulic lines that ran to every single function under the huge hood, he’d figure it out. And he did.

Leave the Stall and Think About It

The reason I write this ancient tale is to share one of the best lessons about mechanical and body repair I ever learned. When Harold couldn’t deduce the solution to the current problem, rather than get frustrated and throw tools or bang doors, he’d leave the shop for the office where we’d have a cup or two of coffee and a cigarette or two and think about it. Sometimes he’d talk it out, sometimes he’d sketch it out on the back of the nearest piece of paper, but mostly he’d just think some about it. After no longer than two cups and two smokes, he’d go try the solutions he’d envisioned. Most of the time, one of the changes worked.

I bought the car from Harold with the new hood installed and the whole sand-metallic-colored car repainted in lacquer and cleared with PPG’s DCA-468 really clear clearcoat. It still had some rough running problems, and Harold and I tackled them together. The engine was a 3.0 liter Maserati dual overhead cam V-6 with three two-barrel Weber carburetors. Sounds exotic and expensive so far, right? Right you are. Even worse, the ignition system was basically set to run two 3-cylinder engines, one system for each bank and half the Webers, so the distributor cap had two pickup brushes. We deduced that timing was likely the problem.  You remember rotors and points, right?

Not surprisingly, there were no V-6 Maserati dual-pickup distributor caps readily available in Waterloo, Iowa. Harold removed the two carbon brushes and springs from the cap even though they were not replaceable items. I panicked because I had driven the car to his shop and had planned to drive it home. We had some coffee and some smokes, and he recalled that both standard C and D cell batteries had a carbon core. What if we used that for new brushes? We cut open both with a hacksaw; the C cell core was too small, and the D cell core was too big. No problem for Harold. He took out his trusty Model 1454 Sioux air drill (a very nice tool) and chucked the D cell carbon core into it. He clamped a 12” double-cut flat file into the bench vise and dressed down the carbon shaft’s diameter until it fit into the retaining springs. We re-installed the newly cut carbon brushes into the distributor cap and I drove the car home.

Go with the Flow

Collision repair and refinishing are part science and part art. The OEM standards have become so high that unless the body shop can duplicate all their perfect panel gaps and flaw-free finish qualities exactly, they will not satisfy either Mrs. Smith or her insurance company. What I learned from Harold 35 years ago was to appreciate the artistry part of car design, deduce how it was originally assembled and deliberately practice patience when the repair wasn’t going well. Harold is long dead; as it turned out, lots of coffee and lots of cigarettes aren’t good for you. So rather than suggest you acquire a bad caffeine and nicotine habit, next time a repair stumps you, step away and enjoy some cold water and some fresh air while you ponder some about the possible solutions. B