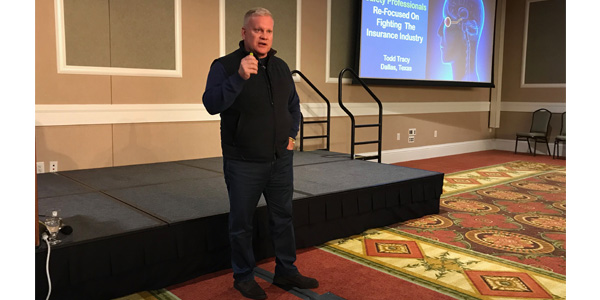 After analyzing the publicly shared crash-test data and videos, IIHS concluded that even though the 2013 Honda Fit modified with some aftermarket parts performed poorly in Tracy’s tests, the structural results were similar to the institute’s past evaluation of the 2009 Honda Fit in its moderate overlap frontal test.

IIHS determined that the test results “indicate that the Fit equipped with non-OEM aftermarket parts in the Tracy test performed on par with our evaluation of the good-rated 2009 Fit, with across-the-board good scores for structure, injury measures and restraints and kinematics.”

In response, Tracy asserted that IIHS is trying to “spin the shocking injury findings” of his crash tests.

“Data recorded by state-of-the-art crash-test dummies indicated that the driver and passenger in an actual wreck might have been decapitated and suffered broken limbs like they were china dolls,” Tracy said. “The IIHS thought police borrowed a chapter from George Orwell’s ‘1984’ when they spun this tale.”

The Tracy-commissioned tests, which took place at Karco Engineering’s crash-testing facility in Adelanto, Calif., involved three Honda Fits: A 2009 with its original OEM parts (the control vehicle); a 2010 with a glued-on roof and an aftermarket windshield; and a 2013 fitted with an aftermarket hood, radiator support, windshield, bumper reinforcement bar, left and right fenders and left and right hood hinges. Karko Engineering subjected each vehicle to a moderate frontal overlap crash test at 40 mph.

When Tracy announced the crash-test results in January, he said the performance of the all-OEM Honda Fit replicated previous IIHS tests showing that the occupants of that vehicle should be able to walk away from an accident. Conversely, the data from the 2010 fitted with some aftermarket parts and the 2013 with the glued-on replacement roof indicated “that both the driver and passenger would suffer broken legs, ankles and feet,” he said.

In its analysis, IIHS said that while the data could point to “a somewhat increased risk of injury compared with the test of an unmodified Honda Fit, the overall rating for the cars in both tests would be good according to IIHS protocol and consistent with our own test.”

Tracy, however, questioned the validity an IIHS “good” rating for protecting people in vehicles equipped with aftermarket parts, contending that his crash tests revealed “catastrophic differences” between the unmodified Honda Fit and the aftermarket-modified Honda Fit.

“IIHS jumped to this ridiculous conclusion without inspecting the test vehicles in our crash lab or discussing the scientific findings with our team of automotive engineers,” Tracy said. “They have confirmed the opinion of vehicle safety lawyers that the IIHS is the lapdog of the auto insurance industry that pressures the use of aftermarket imitation parts to reduce the cost of accident claims. They are wholly supported according to their website by auto insurers. A lapdog can’t bite the hand that feeds them.”

In response to the IIHS advisory, Tracy now urges his clients and consumers to take the IIHS crash-test ratings with a grain of salt.

“The IIHS has become a media darling,” Tracy said. “Now that we know its definition of  ‘good,’ we must ask if the IIHS crash-test ratings are just fake news propaganda by auto insurance companies.”

Todd Tracy: ‘IIHS Is the Lapdog of the Auto Insurance Industry’