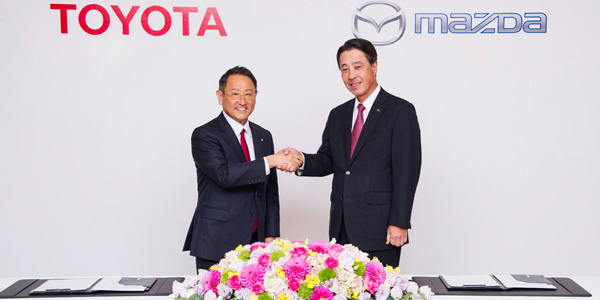 As part of a newly inked alliance, Toyota and Mazda said they will “explore establishing a joint-venture plant” in the United States.

As part of a newly inked alliance, Toyota and Mazda said they will “explore establishing a joint-venture plant” in the United States.

The assembly plant would have an estimated annual production capacity of 300,000 units, the automakers said.

Mazda and Toyota would split the cost of building the facility, which would cost around $1.6 billion and create as many as 4,000 jobs.

The new plant would make new Mazda crossover models for the North American market as well as the Toyota Corolla, they said.

“In addition to the collaboration in product and technology areas that the companies have enjoyed thus far, Toyota and Mazda intend to improve competitiveness in manufacturing through this new production collaboration,” the automakers said in a news release.

“In addition, Toyota will cooperate with Mazda in Toyota’s vehicle-to-vehicle (V2V) and vehicle-to-infrastructure (V2I) technologies with the ultimate goal of creating a mobile society devoid of accidents,” the automakers said.